Female robot slaves, invisibility, shrinking and other forms of super-diminishment — the long, strange journey of the American Superwoman 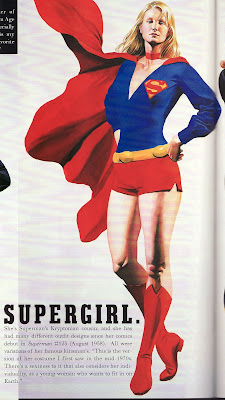 In a way, the black fates of Supergirl and Batgirl turned out to be trial runs they were revisited, with great fanfare, by their male counterparts. As comics grew darker and writers bolder, Superman was slain (but later resurrected, of course — the dead don’t escort you to the bank for long) and Batman suffered a crippling spinal injury.
There's also a house-cleaning factor at work, with the later writers realizing that a distaff duplicate of a popular character serves to undercut the uniqueness and force of the original. And finally there's the philosophical thread which runs through almost all superheroic characters, the concept of the penalty of power, of a price to be paid.
Whether by accident or design, several of the comics' superheroines were, at least for a while, made to suffer what might be termed the final indignity in a male-dominated society. But if the comics often faltered in their quest for a superwoman, they nevertheless marched well ahead of other media. Network television offered several strange examples of superpowered women in the ’60s — not as adventure heroines, but as sitcom characters.
In Bewitched (ABC, 1964-1972), Elizabeth Montgomery portrayed the sweet witch Samantha, commanded by her narrow-minded mortal husband Darrin Stephens (Dick York, then Dick Sargent) to forever renounce her supernatural powers for the pleasure of serving him as a housewife. Darrin's dictum, invariably pronounced in ringing moral tones and never disputed by Samantha, seemed particularly ludicrous coming from a guy who used his talents for the ethically dubious ends of a Madison Avenue executive.
My sympathies were with Samantha's mother Endora (the delightful Agnes Moorehead), who was always on the verge of resolving the whole mess by transforming Darrin into the toad he truly was. The successful series spawned one direct spin-off (Tabitha, with Lisa Hartman portraying Samantha's grown daughter on ABC from 1977 to 1978) and several knock-offs.
The latter tended to reinforce the Bewitched theme that female power is best restrained by male hegemony. From 1965 through 1970, NBC aired the tedious I Dream of Jeannie, with djinn Barbara Eden slavishly devoted to her long-suffering "master" (Larry Hagman). And Bewitched was paralleled by the CBS sitcom My Living Doll (CBS, 1964-1965), which starred Julie Newmar as Rhoda the robot. Her misadventures surrounded the efforts of a psychologist (Robert Cummings) to hone her into the perfect woman. That would be, of course, one who obeyed commands and piped up only when spoken to.
The double-edged, rather sinister image of the robot woman goes back at least to 1927 and "Metropolis" (Fritz Lang's, not Superman's).
In the 1970s, with feminism's influence finally filtering into popular culture, another "mechanical woman" appeared on the tube, this time an action-adventure heroine.
Following the pattern established in the comics, The Bionic Woman was a distaff version of the superheroic Six Million Dollar Man (and extending the pattern to the charmingly silly extent of giving her a bionic German shepherd as a pet). Her limbs and an ear replaced by physically superior prosthetics following a skydiving accident, Jaime Sommers fought threats to national security from 1976 to 1978 on ABC and NBC. 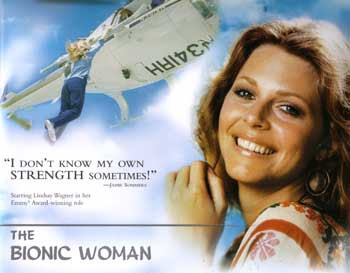 The series' biggest asset was the fact that Lindsay Wagner, playing Jaime, possessed acting abilities far superior to the demands of her role. She conveyed an ironic skepticism about the ultimate value of intelligence work, accepting missions from spy boss Oscar Goldman (Richard Anderson) only reluctantly. More a nurturer than a warrior, Jaime obviously regarded her job as teacher as more important to humanity.
Still, her more outlandish adventures could be fun. In a two-part episode, she and the Six Million Dollar Man teamed up to stop the Fembots (female robot slaves, again) created by a traditional mad scientist. Theatrical legend John Houseman was recruited for the latter role, which he accepted because of his admiration for Wagner, who'd played his daughter in the film version of The Paper Chase.
Ironically, Wonder Woman’s first proposed incarnation on television, in 1967, would have been a gratuitous insult to women, and particularly to feminists. Producer William Dozier’s campy Batman TV series had debuted in January of the year before, so instantly and surprisingly successful that it inspired one of America’s periodic revivals of the superhero fad. Cashing in, Dozier followed up with the Green Hornet series, a more straightforward melodrama featuring Van Williams in the title role and Bruce Lee as his masked companion Kato.

But Dozier’s planned Wonder Woman TV series veered wildly back in the direction of comedy, without actually managing to be funny. In the pilot material that was shot, Diana Prince is fretted over by her interfering mother (an Amazon queen somehow retired to suburban frumpiness?) because Diana remains unmarried despite being 27 million years old.

The running “joke” is that the nearsighted Diana thinks she’s as beautiful as Aphrodite, but is in fact “ugly” (by the network TV standards of the day, which seemed to regard even mildly attractive women as “ugly”). Hilarious.
So here’s a super-strong, super-fast Amazon who regularly saves the nation from ruin, but is nevertheless to be considered a pathetic figure of fun because she’s supposedly too plain to land a man. If this was the attitude of the males who ran the national entertainment media in the “sophisticated” 1960s, it’s no wonder women got fed up with it.
The Amazon heroine suffered another televised misfire in a 1974 pilot movie starring Cathy Lee Crosby. The former professional tennis player was earnest in the role, but the producers couldn’t figure out how they wanted to approach this comic book material, and their embarrassment and confusion shows. It’s not even clear to the audience whether or not Wonder Woman’s identity is secret.
The back-to-basics approach that hit the target came the next year with the strangely but appropriately titled “The New, Original Wonder Woman” starring Lynda Carter.
Faithful to the 1940s comic book, the pilot movie featured characters who did not laugh at themselves, but let the audience laugh if they wanted to. The subsequent TV series benefitted from the fact that the philosophy of Nazism is, in fact, so evil that Nazis always make perfect comic book villains, and somewhat justify and balance the extremity of goodness represented by super heroes.
A pop culture metaphor can serve different ends over time, as the background culture realigns itself. Thus the arguably insulting premise of My Living Doll, played for comedy, became an explicitly feminist premise when played as tongue-in-cheek horror in The Stepford Wives, the film version of Ira Levin's novel. Suburban housewives who assert their independence find themselves quietly "androidized" one by one, with the compliance of their husbands. The film boasts one of those truly delicious camp scenes destined to stick in the memory. When the robot version of Paula Prentiss's character is stabbed in the abdomen, her reaction is a mechanical parody of petulant hurt feelings and wifely good manners. "How could you? Just when I was going to make you coffee," she repeats, over and over again. 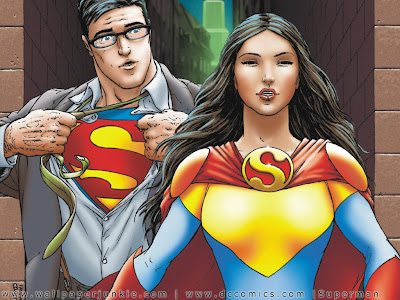 I was waiting for some woman to to step forth from the shadow of the superman, and I think it finally, fully happened on  March 10, 1997, when writer-director Joss Whedon's Buffy the Vampire Slayer went on the air.

Even Lois Lane has, at long last, begun to emerge from the shadow of her boyfriend.
When I interviewed her, Margot Kidder, the actress who played Lois opposite Christopher Reeve's Superman in four films, was unaware that the characters became engaged and then married in the comic books, and subsequently had no secrets from each other. But she wasn't unappreciative of the changes.
“She'll have to get some superpowers next,” Kidder said. “As women's liberation goes on, that's how it should be. Know more and do more. I'm all for it,” she said, adding with a laugh, “But skip the marriage. And make sure he does the cooking."
“Our society’s ideals of fair play demanded there be super heroines,” wrote Danny Fingeroth in Superman on the Couch. “But our society’s ingrained, conflicted and unconscious feelings toward powerful women made the creation of truly crowd-pleasing superhero women takes decades — generations — longer to develop than their male counterparts.”


By the dawn of the 21st century, however, something had definitely changed. Take the Black Widow, for example. She’s a Marvel Comics superspy/martial arts expert who has been kicking around as a minor character since the 1960s. But the ever-insightful director Joss Whedon, who had already given us television’s first fully successful super heroine in Buffy the Vampire Slayer, made her an integral part of the biggest super hero films ever made, 2012’s The Avengers.  And he did it by slyly subverting the traditional popular culture clichés about cringing, shrieking female victims.
For the Black Widow, the villains’ expectation of female weakness is THEIR vulnerability, not hers. When her eyes widen in shock and she seems weak with terror, you can be certain she is a single move away from checkmate. And just listen to the audience cheer. Hollywood has been trying, and failing, to reboot Wonder Woman since the 1970s. Actress Lynda Carter says they’re missing the point.


“I think they try to just make her a female version of a male superhero, and that's not what she is,” Carter told David Weiner. “She is an Amazon Princess and she's got really strong sisterhood values. She's smart, and she just happens to be beautiful and super strong, and she has these great cool things like these bracelets and boomerang headband and non-lethal kinds of ways of dealing with people. She's just saying, like, ‘Get a grip!’ all the time. … She slaps the hands of the bad guys.”
“Maybe they need a female writer who gets it. I've often tried not to say that, but I think it's the truth. It’s like, 'Hellooooo guys, get a female that understands what that's all about.' You look at any society that suppresses women, and it's violent. Look around the world. … There's a humanity that they're missing. There's got to be a sweetness, a kindness, a goodness in the character. The rest takes care of itself.”
I think she’s right. Wonder Woman with a sword, decapitating people like Wolverine, is not what we need. Wonder Woman, like Klaatu in “The Day the Earth Stood Still,” is an emissary from a truly advanced civilization, here in humanity’s 11th hour, to save us from our darkest enemy, the shadow that lies within us.


Interesting, too, to think back and realize that that the first person to fly in an American adventure comic strip was not a man but a woman, Wilma Deering, who was something of a flying flapper. 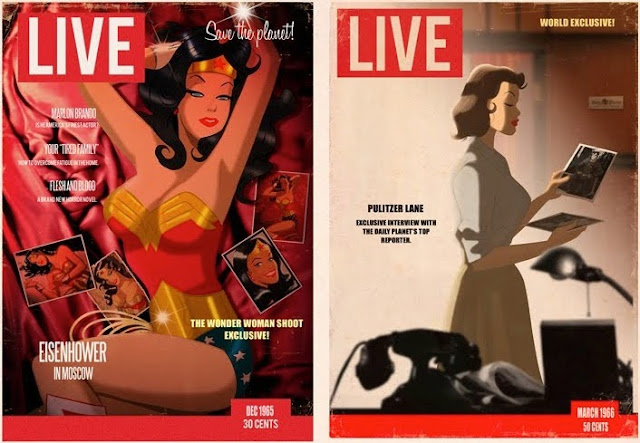 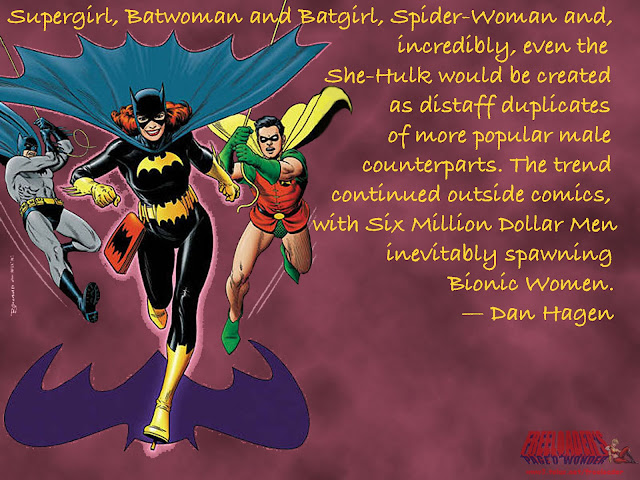 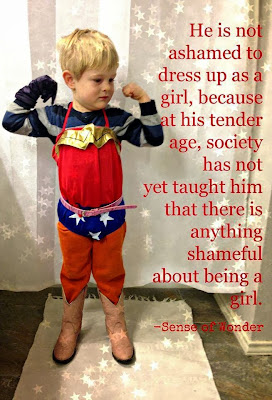