Trapped Inside the Airless Echo Chamber

With his disastrous debate performance, Donald Trump becomes the latest Republican to fall into the Fox News Hive Mind Trap.
As in the last election, Fox News has accidentally pushed the propaganda too far. Then, they told their ignoramus audience that Romney was going to win, not of course to provide the public with accurate information — something they only do by accident — but in order to manipulate them with lies. The election was Toto pulling back the curtain on the Great and Powerful Ailes.
Propaganda posing as journalism is great for your side, right up until you fall off the cliff in the dark. Fox News finally believes its own lies. 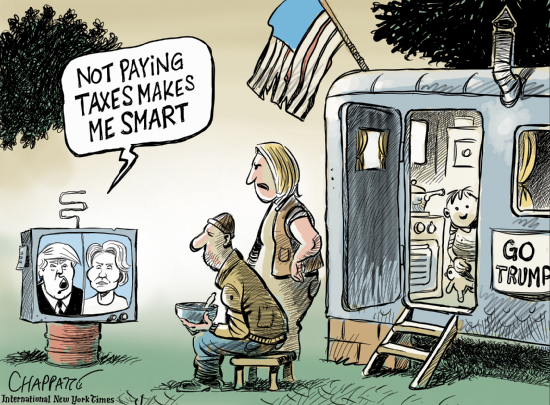 Where No Geek Has Gone Before 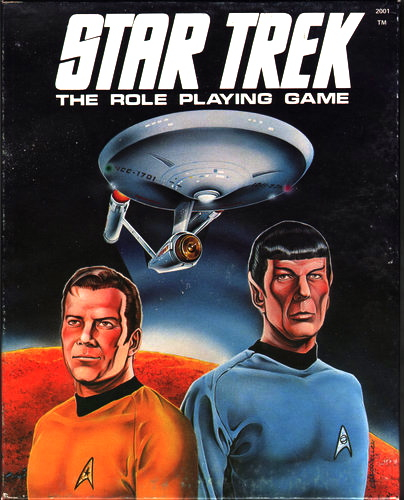 I once walked into a comics shop where the employees and the customers were all playing a Star Trek role-playing game in the back, and nobody was waiting on customers.
One player said heatedly, “The trouble with you is, you don’t know how to set the proximity detonators on your photon torpedoes!!!” I thought, “Geez, everybody in here but me is a geek.”
Then I thought, “Wait a minute. I understood what he said.”
Posted by Dan Hagen at 5:43 AM 1 comment:

Censoring the Comics: We Are Not Amused 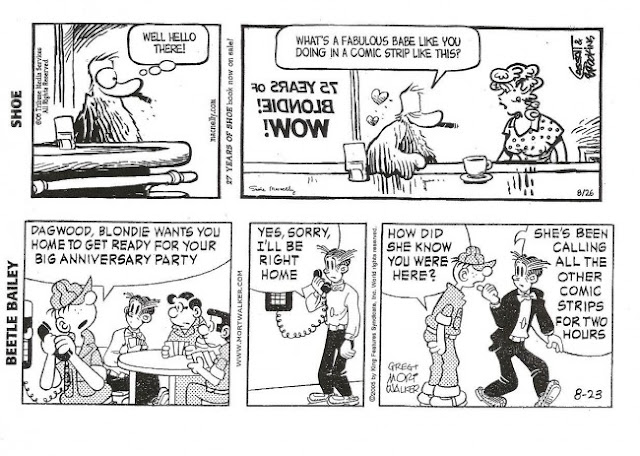 Here’s a column I wrote for the Charleston Times-Courier in the late 1980s. It was reprinted in Illinois Publisher magazine:

“Truth, 'tis supposed, may bear all lights; and one of those principal lights or natural mediums by which things are to be viewed in order to a thorough recognition is ridicule itself.
— The Earl of Shaftesbury, 1709

The comics, it seems, have become a serious business.
This past fall, some newspapers began censoring or even cancelling Cathy Guisewite’s Cathy strip because she poked fun at the Republican record on women’s issues.
Since then, editorial pages from the Mattoon Journal Gazette to the St. Louis Post-Dispatch have been publishing letters which demand that Cathy and other “politically flavored” strips be shifted to the editorial page or yanked entirely.
A letter to the Charleston Times-Courier decried the Doonesbury strip of Nov. 11 as “particularly disgusting.” In it, Satan is shown having a chat with George Bush.
What’s really comic is that all this outrage should be directed at a section which we in the press do not regard as the repository of wisdom in your daily newspaper. We wouldn’t expect readers to form their political philosophies on the basis of comic strips any more than we’d expect them to plan their lives around the horoscope, which will also run for its entertainment value.
“But the comics are read by children,” the letter-writers argue. True, although I suspect that most of our strips are written for and appreciated by adults more often than children.
Even so, is there any reason to assume a child would believe George Bush is in league with the devil because he’s seen it in Doonesbury when he certainly doesn’t believe that a beagle can fly his doghouse into battle with the Red Baron, even though he’s seen it in Peanuts?
That readers should be irritated by the sting of satire is natural enough. That they should subsequently demand its banishment is a sentiment unworthy of them as citizens of a free society. Before we boot Doonesbury, let’s take a closer look at his supposedly innocuous colleagues.
I submit that the alleged “innocence” of the comics page is a myth. In evidence, I offer a page at random — Nov. 15, 1988.
• In Andy Capp, one of Andy’s friends confides that his wife is divorcing him because he drinks too much. Andy replies that drinking too much is what led to his marriage. Alcoholism. Very funny.
• In Peanuts, usher Peppermint Patty orders a student to sit where she tells him “or I’ll break all your arms.” Violence in America’s classrooms is no joke.
• In The Far Side, a crazed farmer’s wife is depicted in hot pursuit of a trio of mice who are wearing dark glasses and carrying canes. The handicapped and the rural homemaker slammed with one stone. We are not amused.
• In Mother Goose & Grimm, Mother reflects, now that she’s older, the new chapter in her life will be “Chapter 11.” Can’t we even refrain from making light of the plight of America’s senior citizens?
• In Hi & Lois, Lois asks the traffic cop who’s stopped her how she can be expected to drive straight while she’s watching him in the mirror. You’d think that, in these enlightened times, our tastes would have risen above “women driver” jokes.
• Blondie fares no better. After Dagwood shells out the bucks for new tires, she refuses his advice on the best brand, remarking, “Don’t tell me how to spend my money.” Hasn’t it been established that the modern woman does not humiliate herself by wheedling money from men? Politically correct persons would never laugh at this.
• Frank and Ernest are bums. Hardly role models for America’s children.
• Garfield is slothful, gluttonous and thoroughly self-centered. Ditto.
• In Beetle Bailey, Sgt. Snorkle advises Sgt. Lugg to eat onions in order to develop halitosis as an added refinement to browbeating privates. Sheer sadism.
• In Bloom County, a cockroach suggests that Bill the Cat be either fried or baked and then eaten for brunch. Too disgusting for words.
Our careful analysis of unsavory elements in the comics has left with a page nearly as white as the purity of our motives.
To demand that the comics remain untainted by politics, by sex, by stereotypes and by social problems is, in fact, to leave little room for humor. “The secret source of humor is not joy but sorrow,” Mark Twain wrote. “There is no humor in heaven.”
Shaftesbury, whose Essay on the Freedom of Wit and Humor is quoted above, also claimed that humor is the only real test of gravity because “a subject which would not bear raillery was suspicious.”
Or perhaps, put another way, it’s just that cartoonists realize that sacred cows make the tastiest hamburger.
Posted by Dan Hagen at 5:08 AM No comments: 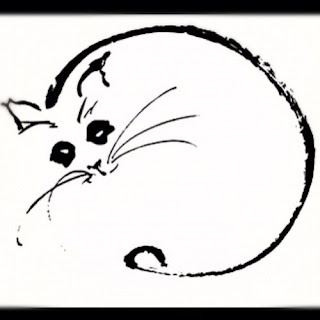 
— Eckhart Tolle
Posted by Dan Hagen at 7:30 AM No comments:

The Plastic Surgeon and Stoic Philosopher 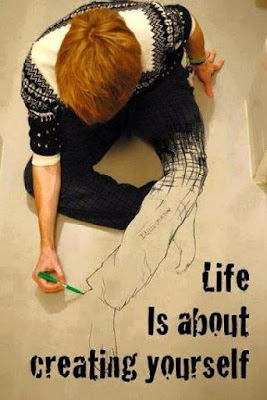 “When I announced that I wanted to be a doctor, I was told that this could not be, because my folks had no money,” recalled Maxwell Maltz. “It was a fact that my mother had no money. It was only an opinion that I could never be a doctor.”
“I not only reached my goals, but I was happy in the process — even when I had to pawn my overcoat to buy medical books, or do without lunch in order to purchase cadavers.
“I was in love with a beautiful girl. She married someone else. These were facts. But I kept reminding myself that it was merely my opinion that this was a ‘catastrophe’ and that life was not worth living. I not only got over it, but it turned out it was one of the luckiest things that ever happened to me.”
In 1960, Maltz became the author of one of those shamelessly American and rather breathless self-help get-rich books, the once-popular Psycho-Cybernetics. A plastic surgeon, he was prompted to write it by his realization that improving a person’s actual image did not necessarily improve that person’s self-image or attitude toward existence.
I was surprised, upon rereading the book, to find so much of it informed by the stoic philosophers. One of his favorite sayings came from Epictetus: “Men are disturbed not by the things that happen, but by their opinion of the things that happen.”
“Even in regard to tragic conditions, and the most adverse environment, we can usually manage to be happier, if not completely happy, by not adding to the misfortune our own feelings of self-pity, resentment and our own adverse opinions,” Maltz wrote.
“ ‘How can I be happy?’ the woman of an alcoholic husband asked me. “I don’t know,’ I said, ‘but you can be happier by resolving not to add resentment and self-pity to your misfortune.’
“ ‘How can I possibly be happy?’ asked a businessman. ‘I have just lost $200,000 in the stock market. I am ruined and disgraced.’
“ ‘You can be happier,’ I said, ‘by not adding your own opinion to the facts. It is a fact that you lost $200,000. It is your opinion that you are ruined and disgraced.’”
Posted by Dan Hagen at 5:59 AM No comments:

Made for Me by a Friend Online 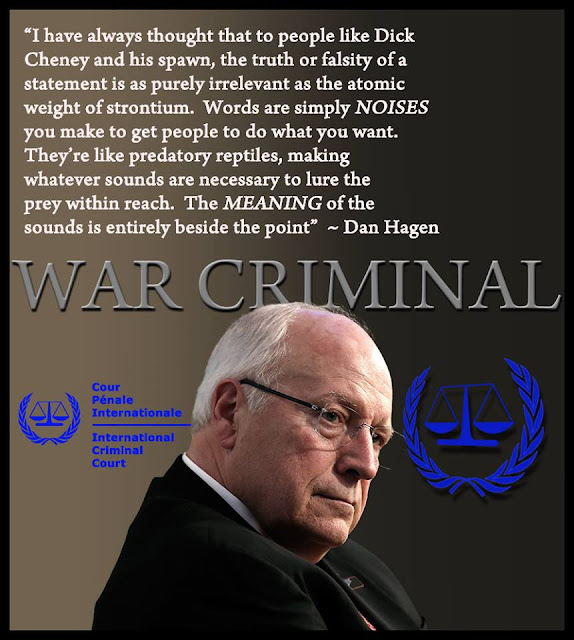