And Now for a Few Scenes from Next Week's Show...

By Dan Hagen
America is a hyper-commercialized society in which you can sell and buy anything, up to and including sex, drugs, adultery, homicide, a ticket to heaven, public officials, citizenship and children.
Americans swim, tread water, gasp and drown in a heaving ocean of advertising that reminds them, several hundred times each day, that buying things is all there is to life. There is nothing more, and if you believe anyone who tells you otherwise, you're a fool. Ancient Chinese secret, huh? 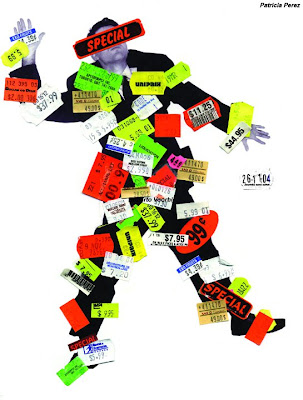 Theoretically, if I described to you a society whose media routinely depicted a baby in diapers as a savvy investment manager, would you regard that society as sane?
Americans pay even for those things that should be free, and are better when they ARE free. For example, hyper-commercialism has promoted over-consumption, a fact that results in an American epidemic of obesity. You can decrease your weight by the direct and free method of counting calories and taking exercise, but you’d never know that to watch American television, which promotes an endless series of dubious, expensive and elaborate diet schemes, up to and including invasive surgery.
That same hyper-commercialism inevitably encouraged over-spending, even as corporate money-worship forbid any increase in wages for ordinary workers. That inherent contradiction was neatly resolved through the insidious promotion of credit cards. And when American citizens finally stagger and collapse under the burden of high-interest debt undertaken to buy Shake Weights, Royal Wedding apps and Burger King Triple Whoppers, what solution does American corporate media offer them? Bankruptcy? Bite your tongue. How about a payday loan-shark service, so you can dig yourself in deeper, or a “debt counseling” service that charges fees (because you haven’t spent nearly enough yet, pal). 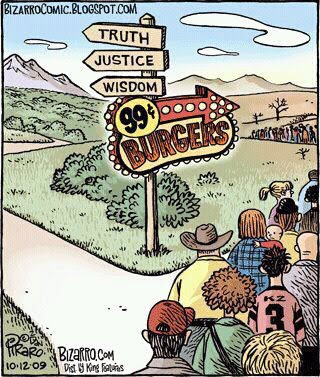 Feeling a little low because of all your debts? How about an expensive lifetime supply of some drug with an idiotic name like Nitralixol or Analdexax and a truly horrendous long list of dangerous side effects? Ask your doctor if it’s for you. Badger him about it, in fact, until he prescribes it. After all, YOU always know best — as long as you keep spending. You are encouraged to worship an Madison Avenue illusion of self that is based on a fantasy of limitless choices, as long as those unlimited choices are limited to those that require spending. If you try to curtail spending, you’re clearly crazy, and our corporate media propagandists will be employed to make up funny names to call you.
Can you think of ANY sphere of American life that is safe from greed in the 21st century? Kind of tricky, isn’t it? Academia? But the billionaire Koch brothers are busy buying and staffing university economics departments. The law, you say? But judges in Pennsylvania were busy convicting and selling innocent children to the for-profit prison system.
Those who are paying attention observe that America is run by and for corporations that regard all human beings as commodities and all human values as convenient but finally illusory public relations fictions, with the exception of a single one: money.
Who wants to marry a millionaire? Who wants to marry a prostitute? Who wants to take a porn star to prom? Hey, why not?
America is in desperate need of a space outside the commercial sphere in which to get itself what might be termed a grip.
Posted by Dan Hagen at 11:59 AM