It’s always been fairly easy to stampede the American herd into a moral panic.
In the early 1950s, comic books had been around less than 20 years, and were said to be corrupting and destroying America’s children — “seducing the innocent,” as one overwrought psychiatrist and author put it. 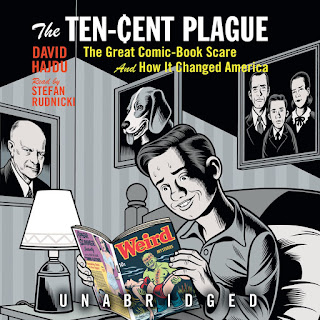 Artist Jim Mooney had a cabin in the mountains where he tried to avoid the topic of what he did for a living, noted David Hajdu in The Ten-Cent Plague: The Great Comic Book Scare and How It Changed America.
“In the summer of 1954, Stan Lee, Mooney’s editor at Timely, came to visit the artist for a weekend, and one of Mooney's area friends dropped by,” Hajdu wrote.  “The fellow, a dealer in hunting equipment, engaged Mooney in conversation about antique rifles, and Lee interrupted, noting that, as a comic book editor, he had expertise in weapons. ‘The guy blew his stack,’ remembered Mooney. ‘He said,  “You do comic books? That is absolutely criminal — totally reprehensible. You should go to jail for the crime you’re committing,’ and on and on.”
That former friend never returned to Mooney’s cabin in the Catskills. But Mooney later discovered what the moralist did for a living. He was a gunrunner to South American mercenaries.
Posted by Dan Hagen at 2:53 AM No comments:

A Mueller Nothingburger? Color Me Unsurprised

The Bottom of the Barrel, That's Where We Are

Truth, Justice and the Liberal Way

The Party That Cages Children