The Job of Journalists 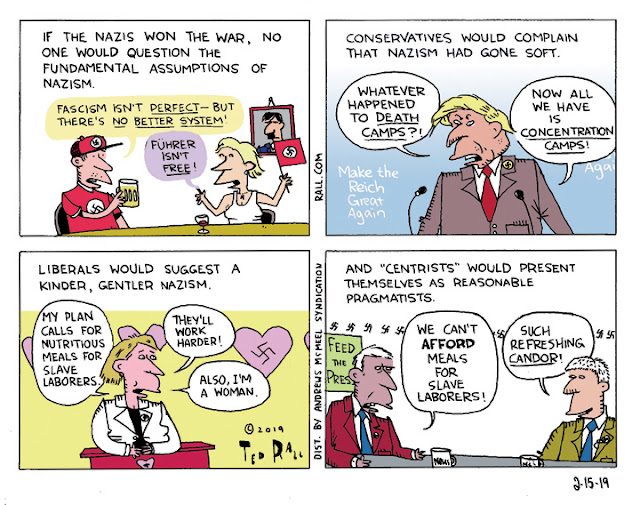 Hooray for “centrism.”
Yes, when you have a difference of opinion, the only proper thing to do is not to inquire about which is right, but always go right down the middle.
You know, like Solomon and that baby.
In 2019, the greatest political threat we face isn’t “extremism,” whatever that is. No, it’s a “centrism” that turns out to have been designed to coddle and enable a fascist outcome — a yellow line “right down the middle” that insistently bears right.
The late and unlamented Washington Post hack David Broder inadvertently contributed another name for this phenomenon: “Broderism.” That’s the worship of bipartisanship for its own sake, combined with a fake “pox on both their houses” attitude.
The main goal of the Broderists was always the establishment of a permanent ruling class of Washington insiders, our betters who know better. It is their rough agenda that is sold as “centrism” even when it has no actual relationship with the political center in a meaningful way.
“Centrism” always presumes itself to be framed by two equally defensible or indefensible positions. That is not the case in reality. That is an unwarranted assumption.
It’s the belief that it all sides are equal and must compromise at all times, regardless of the final outcome or the level of understanding or intelligence presented by each side.
The problem is that “pragmatic” “middle-of­-the-roadism” or “centrism” is, by nature, completely unprincipled. What’s the “centrist” policy on torture? Causing only moderate agony to helpless prisoners? What’s the “centrist” stance on starting unjustified wars? Only every other one?
“Centrism” isn’t a philosophy. It’s just an angle — or a cop-out.
And those examples aren’t merely academic. During Bush and Cheney’s Iraq war, which was based entirely on lies applauded by the “centrists,” many self-described “centrists” actually accepted the use of “moderate, centrist” torture like water-boarding. And that didn’t violate “centrist” principles, because there aren’t any “centrist principles.” Positioning is not principle. 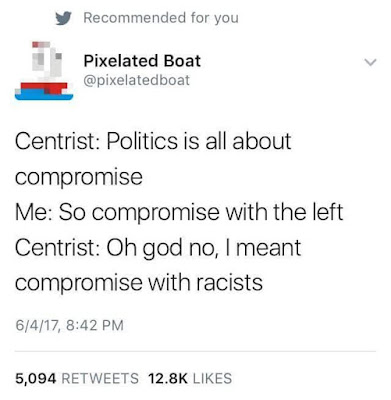 Case in point: before he was banished from the warm, nurturing media spotlight for his sexual transgressions, “centrist journalist” Mark Halperin thought the walking mental vacancy known as Ben Carson was well-qualified to be president, but called President Obama a “dick.” And that tells you everything you need to know about the ongoing con job called “centrism.”
If you stop halfway between left and right, you will not find the home of truth. That’s the address of cowardice and intellectual laziness. Many people take a wrong turn and get lost right around there.
For example, the “centrist” Joe Biden “reached across the aisle” to be a cheerleader for a war that murdered hundreds of thousands of innocent Iraqis. He “reached across the aisle” to shill for a bankruptcy bill that enslaved America’s students in permanent debt. He “reached across the aisle” to sign on to Wall Street deregulation that crashed the world economy less than a decade after it was passed. He “reached across the aisle” to oppose busing to achieve racial equality. He “reached across the aisle” to help his Republican pals slap down Anita Hill.
Yes, Biden is a “centrist” — meaning he CALLS himself a Democrat while he actually votes for the worst policies of the Republicans.
It’s the GOP-accommodating, cozy-cute “across-the-aisle centrists” like Biden who, by offering no opposition to the Republican Party’s steady, decades-long march toward fascism, led us by the nose to the election of 2016, when the Mango Mussolini took over.
As Shane Ryan observed, “There's already a Republican party. You cannot out-flank these people from the right. If there’s a mantra the left should internalize, it's this: Republicans beat centrist Democrats. Always. And the crazy thing is, moderation never saves the Democratic candidate from being portrayed as America’s answer to Che Guevara.”
Democrats have long taken a weak, cowardly, bullshitty and corrupt “we’re all men of good will” approach. And gotten railroaded by Republican know-nothings and drowned out by GOP propaganda on Fox News and talk radio.
If only someone had thought to politely disagree with Benito Mussolini. I’m sure he would have realized how wrong he was, and apologized.
I think many “centrist” Democrats are, in fact, satisfied with the scraps that fall from the medieval orgies of gluttony at the Republican buffet table. Call it the Rahm Emanuel Diet Plan.
Long ago, the Republicans observed that the Democratic Party politicians like Biden were too corrupted, cowardly, confused and completely compromised to fight to protect or even rally their own political base. So that’s a green light for the GOP to destroy the Democrats’ political base, and the American middle class right along with it.
According to “centrists” in the U.S., what the U.K. and Canada have — universal health care — is an “extremist” position. It’s sheer Bernie Sanders whack-a-doodle stuff. According to the political philosophy of  “centrism,” universal health care is wrong, right? Either that, or “centrism” is in fact a meaningless term.
“The financial crisis and the current inequality we face discredits the neoliberal ideology of the past 30 years,” observed Conor Lynch. “Centrism tends to be promoted as pragmatism, and the only way to win national elections. This may have been true in 1992, but today it is false. Centrism is a wolf in sheep’s clothing; a strategy for corporatism, to stop progress with a slogan of practicality. But giving in to the crony-capitalist status quo is not a practical move for the middle class, just the one percent.”
Although Social Security is paid for by a dedicated payroll tax, the “centrists” have long itched to slash and “privatize” the program, along with Medicare.
“Cutting these programs is probably the single highest priority of the tiny centrist elite, and it has been for years, excepting the usual run-ups to our various wars,” noted Alex Pareene. “Part of the elaborate theater of Performing Seriousness in Washington is claiming that ‘everyone agrees’ that the cuts are urgent and necessary, while also bemoaning that no politicians are ‘brave’ enough to support them.”
I once saw a bumper sticker that nailed the “centrists” down tight: “You know what would probably fix everything? Some more tax cuts for the rich.”
As for the effectiveness of “centrism,” Judith Watson observed, “We went high and they stole a Supreme Court seat, installed a corrupt president and now put children in cages. I don’t think it worked.”
My friend Jim Hampton points out that “centrists” are, essentially, the mayor of Amity Island.
“I always think of ’70s Irwin Allen disaster movies when I think of centrists,” Hampton said. “They’re the ones trying to calm everyone down as the disaster is destroying everything all around and closing in. Then th­­­ere’s that one explosion or crack in the earth or shifting of the sinking ship that wakes them up and sends them rushing for the escape route. But as in the movie, it’s always too late.”
Posted by Dan Hagen at 6:21 AM No comments:

The Eternal Magic of the Book