No Jobs But Con Jobs 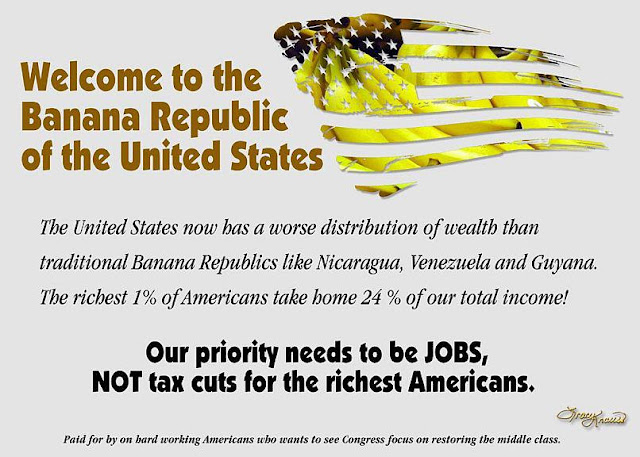 They listen daily to banal statistics — consumer indices, home prices, housing starts, unemployment insurance claims — intoned by newscasters batting the cycle of adjectives for up and down, and they hope for no sound reason that these same talking heads that propelled them to invest in stocks and homes that would only appreciate will imminently announce a combination of factors that will dispel this economic morass.
— Howie Stier
By Dan Hagen
“I never got a job from a poor person,” intone the smug GOP sock puppets, having carefully memorized their approved talking points from Rush Limbaugh and Fox News.
I can imagine their lips moving laboriously while they concentrate on that difficult task.
No, rich people don't give anybody jobs. What gives people jobs is consumer demand created by decent middle-class wages. What rich people do is ship your jobs overseas while you applaud them, you economically illiterate Fox-fed fools.
Actually, you’ve also never been pepper-sprayed in the face by police thugs hired by poor people simply because you were protesting the lack of decent jobs, either. Only the rich hire the police for that purpose, but I don’t think that really qualifies as “job creation.”
The rich, through their rigged Wall Street casino and fraudulent derivatives, actually destroyed millions of jobs in this nation and around the world.
And do spare me all your “free market” high dudgeon. No-bid, no-performance military contracts. Trillions in bailouts for fraud-peddling bankers. Tax cuts for corporations sending jobs overseas. Republicans ADORE federal programs, as long as those programs are devoted solely to preserving and increasing the fortunes of the rich. And they don’t want the working class and the middle class to know that the government can be used for that purpose, hence their constant hypocritical blather about the “free market.”
The free market "everybody gets what they deserve" philosophy promoted by Republicans is obviously untrue on its face, and one that is deliberately designed to ignore built-in institutional, social and economic injustice. 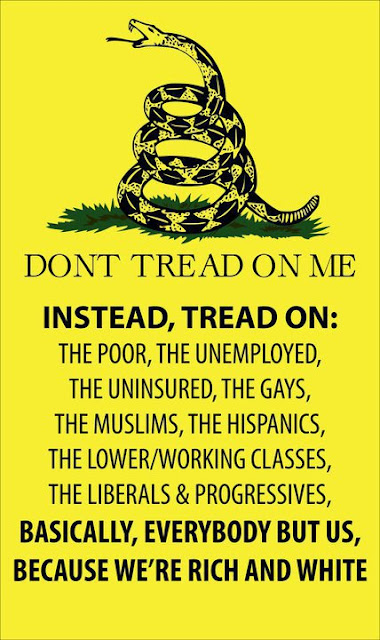 The Wall Street deregulated fraud peddlers stole trillions, wrecked the world economy, got bailed out by the taxpayers they defrauded, paid themselves billions in bonuses with it, and then thumbed their noses at the ordinary Americans whose jobs they destroyed and whom they fleeced twice over, stealing workers' pensions in the process.
Although the rich WON’T create jobs in this country to atone for the economic disaster they and their policies created, the government CAN create jobs, by hiring people to repair the disastrously decaying national infrastructure — just as FDR did in the PREVIOUS Republican-caused Depression.
The government’s GI Bill permitted vast numbers of Americans to become the first generation in their families to get a university education, and really created the great American middle class.
Corporations are now busy dismantling that middle class, and for good reason. Subsistence serfs are much more easily manipulated than educated people, and they don't dare oppose your corporate schemes, no matter what you’d care to do to them — whether its gamble away their life savings with derivative fraud or poison their oceans right in front of your eyes.
As my friend Michael Jones put it: "The GOP platform so far: Subject the women to massive in-their-body government; create more and more poor people by refusing to create jobs in spite of record profits; only create jobs in countries where slave labor is legal; legislate a truly twisted version of what they pretend is their ‘faith;’ and get those young folk out there competing with daddy for a job that pays minimum wage or less. Each family will need four or more wage earners before this malignant bunch are done  — and if you don't like it, you’ll get beaten and pepper-sprayed.”
The right wingers have actually been creating non-union jobs, but unfortunately you have to be imprisoned to get one. Their corporate-­contractor pal Unicor uses what is effectively prison slave labor for jobs like building missile parts for Lockheed Martin. They’ll pay you a whole 23 cents an hour if you can manage to get yourself locked into a federal prison.
In addition to reintroducing slavery in the form of contracted prison labor, conservatives have actually announced their intention to destroy these liberal achievements: child labor laws, the minimum wage, the 40-hour work week, safety regulations, workers' compensation, unemployment insurance, Social Security and Medicare. 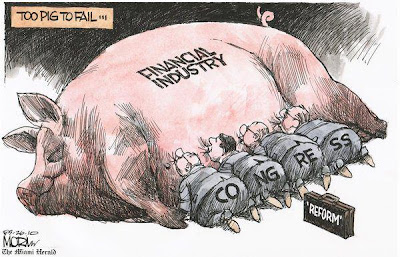 And let’s not overlook just how wonderfully character-building it is for people to be without decent wages, jobs, retirement and health care. Up, up, up by those bootstraps. The people whose union jobs have been killed by Republicans really ought to thank the billionaires and their handmaidens in the GOP for diverting America's wealth overseas and giving them this great opportunity at self-improvement from the ground up.
When Republican politicians hug their carefully staged families on your TV and tell you they’re “business friendly,” they mean that they intend to destroy your American standard of living. That's what they laugh about privately over those $350 bottles of wine they are bribed with.
Republicans in power don't "fix" things. They only bark, bite and bay at the poor in answer to the whistle of their plutocratic masters, just like any pack of well-fed and well-trained curs. 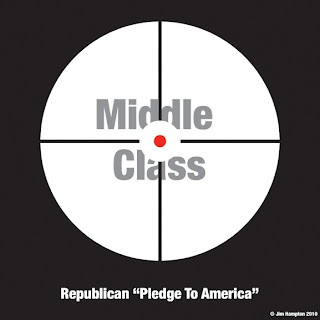 Here's the very definition of “compassionate conservatism” for you and the ENTIRE Republican economic plan, all in one.
“You work three jobs? Uniquely American, isn't it? I mean, that is fantastic that you're doing that.” That’s trust-fund baby and serial business failure George W. Bush speaking to a divorced mother of three in Omaha, Nebraska, on Feb. 4, 2005. His eloquence was always unintended and inadvertent.
The Republicans supposedly think "tax cuts" will rebuild a world economy wrecked by their deregulated fraud. How painfully laughable. We've had a decade of nothing but tax cuts, and THIS is where we are.
What the Republicans really mean, of course, is that they would prefer to do nothing but protect the rich as millions of Americans lose their jobs, their health care, the roofs over their heads, even the food on their plates.  None of them will say it, but that’s what they mean. The actions of the congressional Republicans are making that quite clear right now.
The destruction of the American middle class isn't a problem for the Republicans. It's a plus.
The Republicans are, after all, quite serious about using the national debt they have deliberately exacerbated as a weapon to finish off the American middle class. They want to effectively reduce ordinary Americans to the level of feudal serfs. So much more manageable that way. Serfs don't dare talk out of turn, do they? 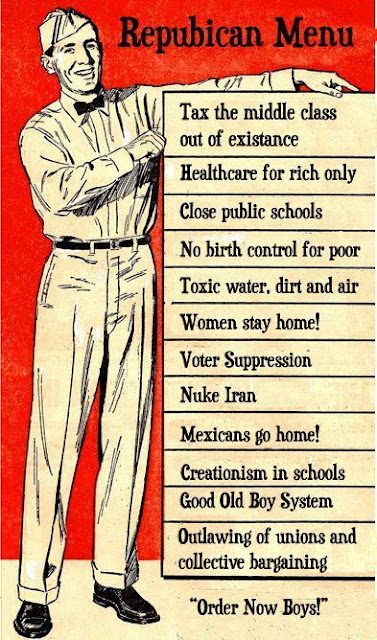 American plutocracy is all about entitlements, retitled “free market,” and propaganda that fools working class people into slicing open their own throats so the plutocrats can sell the blood.
But what about the press? Can’t they expose all this? Corporations don't like professional journalism, and never have. Unexpected spasms of truth are inconvenient for the bottom line. Corporations like info-manipulated audiences. And now that corporations have almost complete control of American journalism, they intend to eliminate it. They'll keep nothing but the name, which they'll hang on something else entirely.
Political discourse in the U.S. isn't rational at all any longer. It's all advertising-driven and propaganda-pervaded, designed to make Americans feel better about their severe inadequacies by identifying the product (some lying, brainless, power-drunk politician like Sarah Palin) with the relief of their anxiety about those inadequacies.
Poor and middle-class Americans are losing any control over their lives and wealth, by design, so a Bush or a Cheney offered them the compensating distraction of a fascist fantasy of Hollywood “toughness.” You say you have no power over your own life? Then forget about it and glory in your Pentagon's power to shock-and-awe thousands of brown, far-off, fungible civilians into bloody bits in your name.
They get away with such lethal absurdities because the subservient news corporate media and the Democrats let them. Republicans have observed that the Democratic Party politicians are too corrupted, cowardly, confused and compromised to protect or even rally their own political base. So that’s a green light for the GOP to destroy the Democrats’ political base, and the American middle class right along with it.
The belief that all sides are equal and must compromise at all times — regardless of the final outcome or the level of understanding or intelligence presented by each side — is sheer nonsense and “centrist” insanity.
And when the Republicans have succeeded in destroying the social safety net and all American unions, along with public education, and reducing the American standard of living to third-world subsistence with no benefits, just who will drive America's “consumer economy?” No one. It will be dead, along with the once-great American middle class.
And without a broad middle class, no democratic republic can survive. PERIOD. End of the American story. 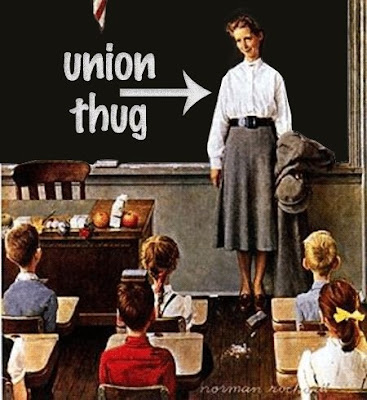 “If we were herded like cattle, there was a certain rough poetry to that,” RJ Eskow wrote. “Wall Street has never needed less from ordinary people to generate its wealth, which is why corporate profits are so high during a period of massive unemployment and a decaying middle class. But it still needs us a little. Our labors and debts are still the raw material that Wall Street slices, layers, bundles, and sells for its financial instruments. Our household finances are to Wall Street derivatives what cows are to hamburgers.”
And when the nation starts to collapse as the middle class and the working class stagger and fall from the effects of this corporate rape, frankly, who cares? There are always the mountain resorts of Switzerland to be enjoyed, or the vast estates of Paraguay, or the dazzling, sun-soaked fleshpots of Dubai.
There, the corporate masters can watch the chaos they've created from a safe, lofty distance. And there are always more easily gulled serfs where the late, great Americans came from.
None of this is news, and if it were you wouldn't be getting it from the corporate media anyway. As George Bernard Shaw observed long ago, the faults of the burglar are the qualities of the financier.
Liberty produces wealth, Henry Demarest Lloyd observed, and then wealth destroys liberty.
I am reminded of the scene in Dickens when the aristocrat's hell-for-leather carriage runs down and kills a peasant child, and the aristocrat complains that the silly peasants under his wheels might have hurt his horses.
Think that’s a bit over the top? But do you remember that Colorado hedge fund CEO who ran down a doctor on a bike in a hit-and-run? The prosecutor actually said he refused to charge the man with a felony because hedge fund managers are too important for that.
With no options left, and no voice in either party or the corporate media, the America people have finally taken to the streets. Now comes the Occupy Wall Street movement, and the right wingers’ chief propagandist, Frank Luntz, has admitted that the clarity of its complaints terrifies him.
The Occupy movement is a broad, horizontal battering ram slamming relentlessly and repeatedly into vertical corruption. And the vertical tower is trembling.
Did the arrogant, globalized plutocrats and their political puppets really think they could just busy themselves guzzling Chateau Lafite Rothschild and leave ordinary people without resources, jobs, education and hope forever? Really? Have they never heard of the year 1789? 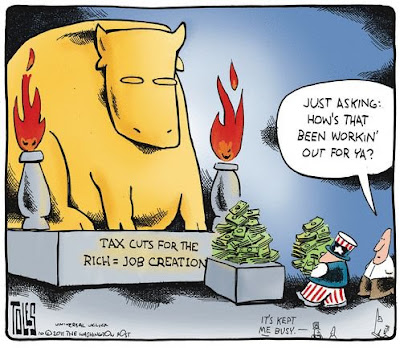