And the Photo is Also of a Vegetable 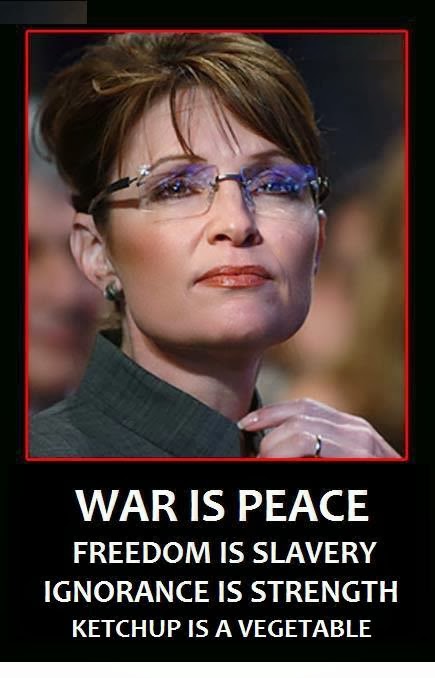 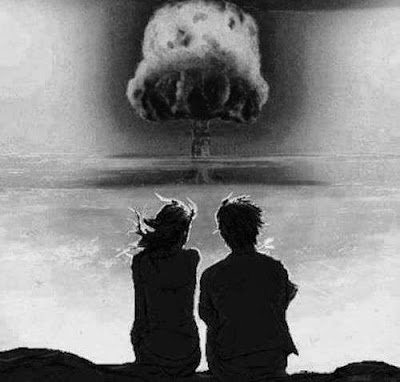 If the Tea Bagger GOP defaults on the national debt, thereby sending the world economy into another tailspin, no one should pretend to be surprised.
We have been permitting the press and the parties to treat delusional and/or power-mad, whored-out cretins like Palin, Cruz and Bachmann as acceptable political leaders for years now.
You can't put a blind moron behind the wheel and permit him to floor the gas pedal without knowing what comes next for you. You're along for the ride. 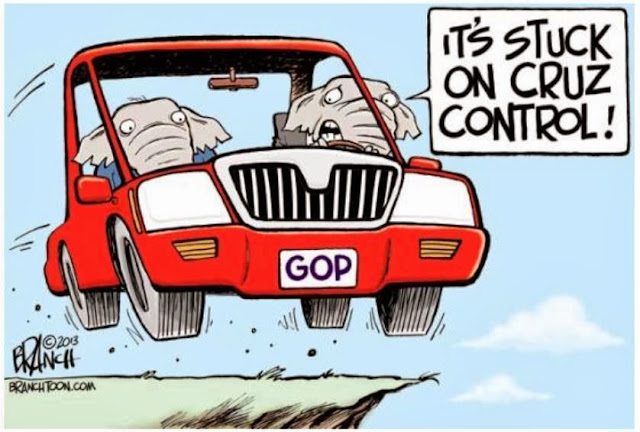 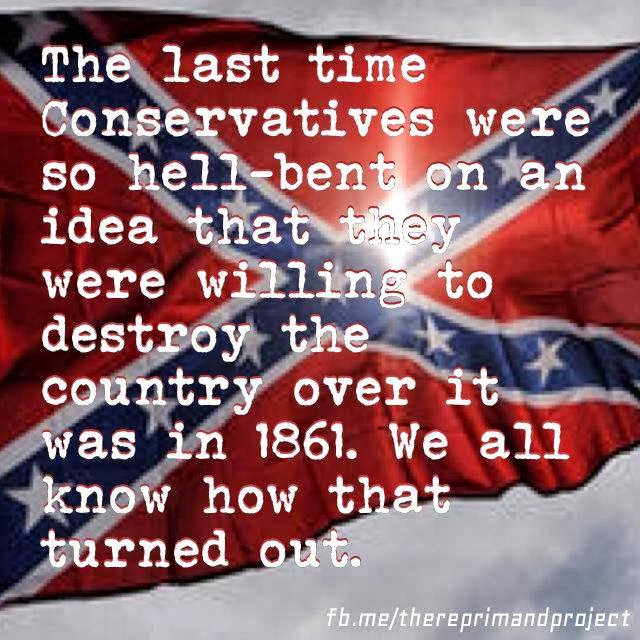 A Romantic Comedy for an Unromantic Age


By Dan Hagen
“Pillow Talk” was the romantic comedy perfectly suited to its year, 1959, which means it’s extremely dated now. But the romantic comedy “Don Jon,” as 2013 as a text message, is just as funny as the Doris Day vehicle ever was, and has a bit more heart.
Instead of a smartly dressed Manhattanite on a party line, we get a lower-class bartender on porn. The veneer of sophistication is replaced by a veneer of crudity because, as you may have noticed, our times are crude. But there’s humor beneath the vulgarity, and humanity beneath the humor.
Joseph Gordon-Levitt wrote, directed and starred, and every smart trick he learned in a Hollywood childhood is up there on the screen. He knows that one secret to a great screen joke is to startle the audience with its truth.
He plays a self-contained young man whose self-imposed limitations power his self-satisfied Jimmy Cagney strut. He has just eight interests, no more — his body (muscled), his car (muscle), his buddies (beer), his family (Italian-American), his church (Catholic), his girls (many) and his apartment (clean, thanks to his quirky Felix Unger fervor). And, of course, his on-line pornography (addictive).
Secretly, he prefers the perfection of porn to the girls he beds, until someone even more perfect crosses his path and upsets his balance. Falling fast and hard for a woman who looks like Scarlett Johannson (because she is) and sounds like Fran Drescher, he learns that perfection comes with its own set of demands.
Gordon-Levitt, meanwhile, knows how to make perfect use of the elements at his disposal, which include Johannson, Glenne Headley, Tony Danza, Julianne Moore and the satiric possibilities of ritual. He swiftly and hilariously skewers the ritualized silliness of dance club pickups, of the way guys yell in cars and even (play within a play) of romantic comedy films (Anne Hathaway and Channing Tatum pitch in with cameos there). This is the best kind of comedy, the kind that hits so close to home that the audience is sometimes momentarily too startled to laugh.
Finally, Gordon-Levitt’s character will need to exceed his limitations, and to do that he’ll have to heed the voice of wisdom, which comes from an unexpected quarter.
This movie is a daybreaker (so good it breaks your day cleanly into halves, before and after). It’s the best film I’ve seen in the last 10 months.
Posted by Dan Hagen at 1:19 PM No comments:


In 43 B.C., a Roman teenager named Atilius was newly rich, having just come of age and inherited a fortune from his late father.

He and his friends were celebrating, making sacrifices in temples near the Forum, when he saw his name on the white boards there, and went white himself.
In the shifting civil unrest that prevailed since the assassination of Julius Caesar, former foes Mark Antony and Octavian (later the emperor Augustus) had met under truce on a small river island to pool their power.
They and Antony’s friend Lepidus had formed the Second Triumvirate, essentially a shared five-year dictatorship. They needed to raise money for armies to oppose the forces of Caesar’s assassins, but how?
The answer was proscription — declaring on white boards in the Forum the names of those citizens who were to be killed, with their lands and fortunes seized. The three of them haggled to create a list of political and personal enemies they wanted to see liquidated. Anyone who informed on one of the proscribed persons or helped to kill him got a cut of the loot.
The young Atilius’ only crime was having a fortune worth stealing. His friends and slaves immediately deserted him, and he went to his mother, who was too frightened to hide him and turned him away.
Alone, Atilius fled to the mountains. But the rich boy was eventually forced by hunger to return to the road, where a highwayman kidnapped and enslaved him. In chains, he managed to escape to a main road where he identified himself to passing centurions. Unwisely, as it turned out.
They killed Atilius and probably cut off his head. After all, why drag a whole body back to Rome for the reward when all you need is the head?

“When you arise in the morning, think of what a precious privilege it is to be alive — to breathe, to think, to enjoy, to love,” wrote Marcus Aurelius, the stoic philosopher who was also a Roman emperor. “Do every act of your life as if it were your last.”
The idea of taking nothing whatsoever for granted may seem unduly harsh to us now, but the Romans had their reasons.
Sources: “Augustus” by Anthony Everitt; “Meditations” by Marcus Aurelius
Posted by Dan Hagen at 4:36 AM No comments:

Manhood and Its "Prisoners"


“Prisoners” is an absorbing mystery thriller about a town plagued by years of child abductions, starring the always-engaging Hugh Jackman as an authoritarian survivalist male who is out of his depth. Jake Gyllenhaal gives a subtle performance as a watchful police detective named, for some intriguing reason, Loki.
It's easy to lose track of the number of prisoners in the film, and some of them — like Jackman's character Keller Dover — are prisoners of ideas that finally do not serve them or their communities well.
Denis Villeneuve’s film gives us things to think about as it spins out its web of fairly excruciating suspense — among them, the limited utility of masculine aggression. That very idea violates what is virtually a 21st century Hollywood movie sacrament.
I was interested to realize, considering the film's ruminations on masculinity, that one of the final breathless scenes exactly parallels a situation in "True Grit." That's what Jackman has, too, and it isn't nearly enough.
Posted by Dan Hagen at 5:53 PM 1 comment: 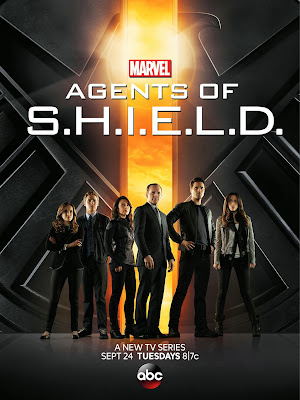 Yes, THAT’S what I was waiting for in ABC’s “Agent of SHIELD ” — the flying sports car from Marvel’s “Nick Fury, Agent of SHIELD” comic book feature in the 1960s. Creator Joss Whedon always knows the right iconic touch to include.
The "Agents of SHIELD" interrogation scene, for example, was pure Joss Whedon gold. "Gramsy?"
And at the center of this pilot episode was a fine ambiguity about what makes a “good guy super hero.” Isn't the man who fired him a villain? And shouldn't he therefore be crushed?
Plus, at the finish, did I not hear the echo of a Joad-like plea for the much-shit-upon American common man?
Yes, this series will be fine. Whedon always strikes the right balance of humor and melodrama, familiarity and surprise.
“The Man from UNCLE” movie people had better get it right, because I think they’ve just been beaten to the punch by a series that has crossed their concept with “Torchwood.” Ironically, the SHIELD comic books were inspired, of course, by “The Man from UNCLE.”

In the Country of the Distracted

Reason in the Headlights

When Smart People Just Can't Seem to Understand You...

Stealing from the Blind? Not When He’s Around

And So It Is 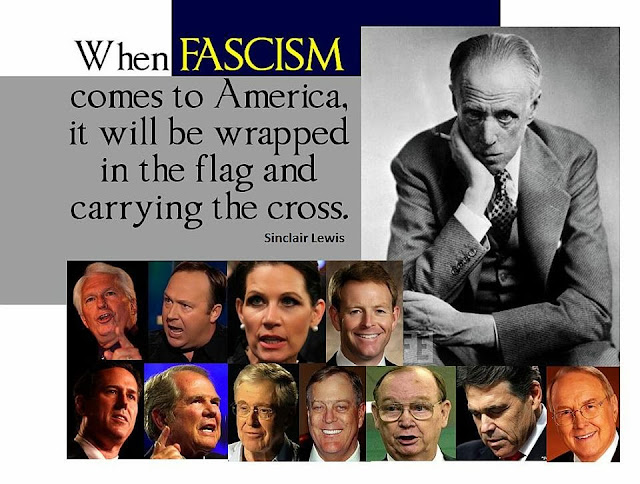 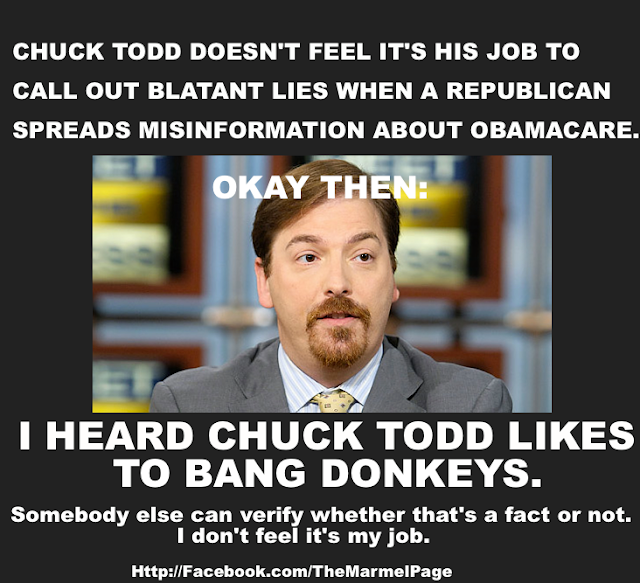 I always thought Chuck Todd was perfectly named. "Tod" means "death," and sleazy hackwork like his means the death of professional journalism. As Charles Pierce observed, this is how the manure gets spread.


For the record, one of the primary duties of a professional journalist is to RESEARCH and CORRECT factual misinformation, not merely to REPEAT it.
Poor, poor Chuck. We criticized him just because he was honest enough to admit that he is not actually a professional journalist, but a kind of stenographer-hack, and now we’ve hurt his fee-fees.
Posted by Dan Hagen at 4:43 AM No comments:

You May Not Remember Trash Pickup Day, But Crows Do

All Those Lonely Intellectuals


Edmund White recalls sociologist and author Dick Sennett, who lived in a converted stables off Washington Square where he entertained the Sontags and Foucaults who regularly dropped in.
“No one paid much attention to the food or the liberal lashings of plonk. It was all a plush background for the startling mondaine reality in the frame: the good talk and the promise of even better talk.
“Dick knew not to quiz the great about their Subjects, their Accomplishments, but rather to tease them about their secret Vices, their hidden charms, their unheralded powers of Seduction. He was always grabbing the hoary hand of a grizzled Oxford don and saying, ‘Oh, what a naughty pussycat you are! Aren’t you? Aren’t you? Such evil, evil naughty thoughts — and Deeds! Yes, Deeds, Mr. Pussy-Boy. Okay, everyone, ´å table, ´å table, and remember: Paws up!’
“No one quite knew what paws up meant, but it sounded like a cross between an eating club slogan and a half-forgotten piece of nursery (or else Masonic) mummery.
“All those lonely intellectuals, their eyes hollowed out from years of reading microfiches and medieval script, from gabbling to themselves over tinned beans and Bovril in unheated Rooms, were now being stroked and feted and fed. They were like feral cats being tickled behind the ears for the first time. They were purring, though still looking around anxiously for the next boot in the rear, the next nasty review by a rival in the Times Literary Supplement. Nor did Dick invite just the old and famous. He knew they needed young and lovely nobodies to make a fuss over them.”
I had to look up “mondaine,” a sociological term meaning “characteristic of fashionable society; worldly.” Indeed. I also had to research “Bovril.” Sounds like dreadful stuff.
— Edmund White, “City Boy”
Posted by Dan Hagen at 2:49 AM No comments: 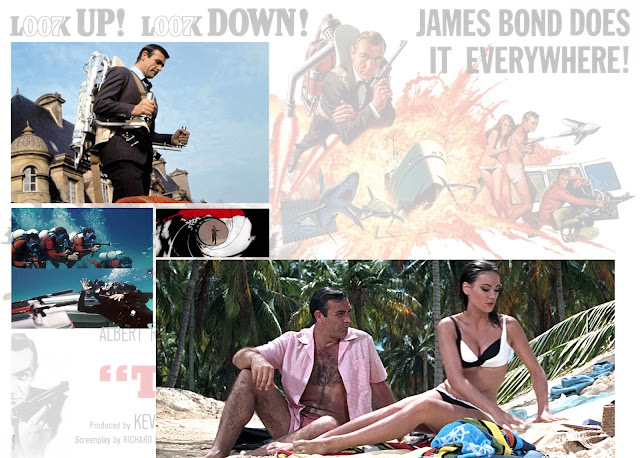 Here's the title theme to Thunderball you never heard. The producers replaced Shirley Bassey’s song at the last minute with the Tom Jones Thunderball theme, so John Barry's excellent "Mister Kiss Kiss Bang Bang" is heard only as an instrumental piece during the film.
Although not the best James Bond film, Thunderball remains my favorite. The fourth 007 adventure was a smooth blend of all the elements that made Bond immensely popular in the 1960s, plus an assured, debonair performance by Sean Connery, a big and thrilling underwater battle scene and a nuclear blackmail plot that was then fresh and original (such a good idea for a plot, as a matter of fact, that it has since become a movie cliché).
Posted by Dan Hagen at 12:47 PM 1 comment: