The Mother in the Aisle

By Dan Hagen
The mother's long, white hair made her look older than she was.

Her dark-haired son loomed above her, at least six-five but deferential now, learning to navigate the food aisles at the Mattoon Wal-Mart.

She pointed and made points about what to look for when you buy coffee. He listened, a little uncertain now, excited but unsettled here on the eve of things he had long wanted but whose shape he could barely make out.

He may have spent months in the past deliberately NOT listening to his mom. But today he listened as she talked about prosaic products like air freshener and mops and low-fat turkey hot dogs.

Once upon a time, peevish and irritated and overworked, she may barely have looked at him from one day to the next. Now, as he leaned over to examine Tetley's black tea, she drank in sidelong glances at him.
Last glances? She would push that thought away hurriedly and get back to brisk business. Remember this. You might try this. Don't ever do that, or this will happen.

The young hunter is learning the skills of a gatherer this morning. The tons of warm, fragrant nutrition that had turned him into this small tree of a human being had simply appeared on his plate, for the most part, and he had never wondered much about them, except maybe to complain. He had been thinking about Playstation or soccer practice or Ashley. But now he thought about some of the complexities of food, maybe catching even a little hint of the wonder of it, and looked down at his mom and listened to her.

She will smile brightly at him today, and buy him an impulse gift, and warn him about using his credit card too much, and help him unload the last of his stuff.

She will give him a little wave as she backs the car out of the driveway of the converted house where he has a new apartment with his new friends in his new life.

Later, at home, she'll be cleaning out his closet when she will come across a pair of his old sneakers, shaped by wear exactly to his giant feet, and she will be surprised at the tears that burst from her.

But that's hours from now. Now it's Folger's or Maxwell House or fresh-ground?

As I maneuver around their cart, she pulls it out of the way, apologizing.

"That's all right," I say, "I'm always happy to see a college ritual."

Her son looks puzzled, but a look flashes between his mom and me and there's meaning in it.

She throws back her head and laughs, and now she looks young, as young as the boy. 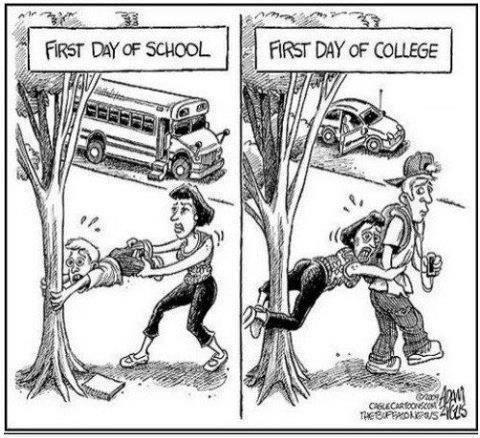