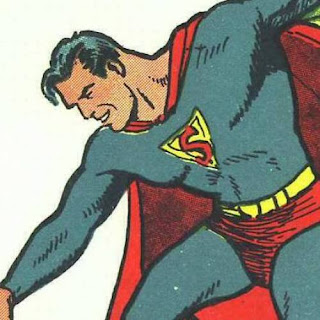 By 1938, after the long experience of the Great Depression, the super hero figure was as inevitable as he was invincible.
The explosive popularity of Superman, introduced that year in the first issue of Action Comics, is usually cited as the origin of the concept. But it was a concept whose time had come, Clark Kent or no Clark Kent.
Was the ordinary American jumpy, even fearful that year? Well, in 1938 Halloween went from being a children's holiday to an occasion for nationwide panic, thanks to Orson Welles' "War of the Worlds" radio broadcast. (Oddly enough, Welles was himself playing a super hero on radio at the time).
About a million Americans reportedly believed that the dramatization of H.G. Wells' 19th century Martian invasion novel was an actual news broadcast, many having tuned in late because they had been listening to the top-rated Charlie McCarthy program on another network. Noted wit  Alexander Woollcott telegraphed Welles later to say, "This only goes to prove, my beamish boy, that the intelligent people were all listening to a dummy, and all the dummies were listening to you."
Although funny, that wasn't quite fair. Americans had considerable reason to be nervous in 1938. The worldwide Depression, sparked by the U.S. stock market crash in 1929, had dragged on for nearly a decade. Ill-advised federal spending cuts caused the recession of 1937-38, when American industrial production fell 30 percent and unemployment jumped from 14 percent to 19 percent. Even Franklin Roosevelt, elected as America's rescuer, seemed to have failed in 1938.
In 1938, Hitler seized control of the German army and invaded Austria and Czechoslovakia. Fascist Italy enacted anti-Semitic legislation. Spain fell to the fascists.
Events conspired to remind the ordinary citizen that he was small and powerless and threatened by vast, mysterious, evil forces. It was natural, then, that he should dream of equally powerful and mysterious avengers.
Superman, who had been knocking about without a publisher since 1933, certainly filled the bill. But he wasn't alone. The Spider, a bloodthirsty mystery-man crime-fighter in the pulp magazines, made his movie debut in a 1938 serial, decked out in a superhero-style webbed cape and black, hooded body suit.
The Green Hornet, the urban Robin Hood who was the great nephew of the Lone Ranger, went nationwide on radio that year. He battled organized crime and urban corruption against which officialdom was powerless, a premise made explicit in the series' tagline: “The Green Hornet! He hunts the biggest of all game. Public enemies that even the G-Men cannot reach!”
Superman's first foes were also easily recognizable to the newspaper readers of 1938. They weren't mad scientists, but the greedy owners of unsafe mines, corrupt Washington politicians, homicidal drunk drivers and munitions manufacturers who started wars for their own profit.
In 1938, evil didn't have to be exotic. It was so close you could smell its bad breath.
The Shadow, merely a sinister and mysterious radio narrator when he was introduced in 1930, proved so popular that he became a pulp mystery man in 1931. He returned to radio in the fall of 1937 as an psychically powered invisible avenger in the person of Orson Welles, and made his film debut that same year in "The Shadow Strikes."
The St. Louis-born Lee Falk had introduced American newspaper readers to his magically powered adventurer Mandrake in 1934, and then to the mask-and-tights jungle titan the Phantom in 1936. Falk was precise about the nature of the wish fulfillment he intended to provide.
"To me, The Phantom and Mandrake are very real — much more than the people walking around whom I don't see very much. You have to believe in your own characters," Falk said in an interview. "(The Phantom) hates dictatorship, and is in favor of democracy. He is also opposed to any violation of human rights."
The Shadow, Doc Savage, the Spider and the Phantom Detective, among others, remained busy saving cities and countries in the pulp magazines.
In 1938, the desire to see a superhuman champion of humanity wasn't campy or ironic, but regarded as something of a necessity in a pretty terrifying world. The exploded planet that gave us Superman wasn't really Krypton, but our own.
By the way, Batman, who appeared in 1939, was also inevitable. At the same time "the Bat-Man" was introduced in Detective Comics, a crime-fighter disguised in a black cowl and cape who called himself the Black Bat appeared in pulp magazines. Neither was apparently a copy of the other.
It was perhaps coincidence, but I'd call it cultural synchronicity. The troubled culture shines the signal, and the hero always answers the call.