A Man and His Ravens

Email ThisBlogThis!Share to TwitterShare to FacebookShare to Pinterest
Labels: Memoir, The Adventures of Dan Hagen

American Fascism Has Arrived, My Friends 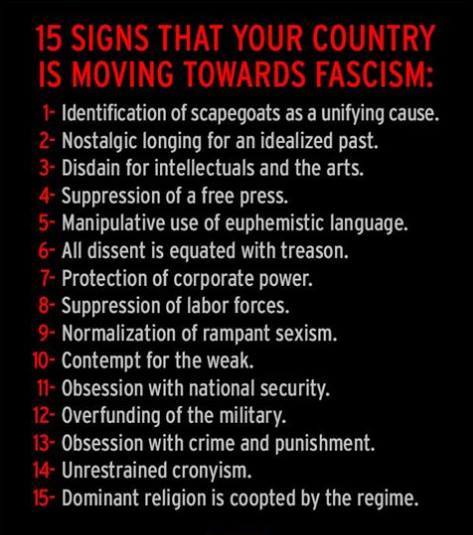 In the 1948 film comedy Mr. Blandings Builds His Dream House, Cary Grant’s teenage daughters lecture him that their teacher, Miss Stellwagon, has informed them that advertising is a basically parasitic profession that encourages people to want things they don’t need and can’t afford.
Throughout the movie, Grant’s lucrative Madison Avenue job is in peril because he can’t think of a good slogan for a product called Wham. Finally he comes up with the perfect slogan — by stealing it from his black maid.
I call that a point for Miss Stellwagon.
“Mr. Blandings never seems to have any work to do, apart from thinking up a catchy slogan for Wham, and he has six months to do that in from the time when he finds out that the account has devolved on him,” noted James Bowman of the Ethics and Public Policy Center. “For this, the agency pays him $15,000 a year, or the equivalent of between $250,000 and $350,000 today, depending on the equivalency measure you choose. And when he finally does stumble on a slogan, it isn’t even his but that of Gussie, the maid, played as a now cringe-inducing stereotype by Louise Beavers. Rather like the gold-seekers in Treasure of the Sierra Madre, the advertising business seems rather buccaneering. Finders keepers and tough luck Gussie, who makes a final appearance in an exaggerated chef's toque and presenting an enormous platter full of Wham above the slogan: ‘If you ain't eatin' Wham, you ain't eatin’ ham’ — a patent falsehood to rank with ‘If you can't sleep at night, it isn't the coffee, it's the bunk.’
“Yet neither question — that of the slogan’s rightful owner or its truthfulness — ever arises in the movie. Its concern isn't with how Jim gets his money but with how he’s going to spend it.”
I can’t help thinking Americans were a lot smarter in 1948 than we are in 2017.
Posted by Dan Hagen at 6:05 AM 2 comments:

Sweet Land of Lottery, Of Thee We Sing 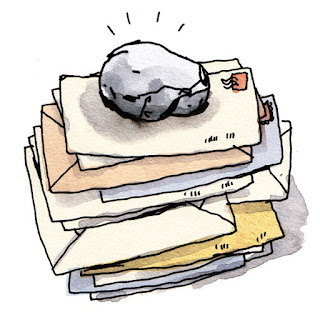 I am particularly fascinated by the revulsion with which many readers of the New Yorker greeted Shirley Jackson’s short story The Lottery when it appeared in the June 26, 1948, issue.
“One of the most terrifying aspects of publishing stories and books is the realization that they are going to be read, and read by strangers,” Jackson wrote later. “I had never fully realized this before, although I had of course in my imagination dwelt lovingly upon the thought of the millions and millions of people who were going to be uplifted and enriched and delighted by the stories I wrote.
“It had simply never occurred to me that these millions and millions of people might be so far from being uplifted that they would sit down and write me letters I was downright scared to open; of the 300-odd letters that I received that summer I can count only 13 that spoke kindly to me, and they were mostly from friends. Even my mother scolded me.”
The readers seemed unpleasantly surprised, as if Jackson’s fantasy tale were some big, hard stone thrown by one of the residents of Jackson’s pious and traditional American town.
People who choose to wear blinders often get blind-sided, I suppose.
It can smart, even today, when you suddenly realize that behind the ringing Madison Avenue slogan of “Liberty And Justice For All” lies the ritualized shooting of unarmed black men by America’s anointed agents.
Rereading the story last May, I realized how aptly it anticipated Donald Trump’s America  — happy small-town families selecting innocent people to torture to death in a ritual that serves their self-satisfied, never-to-be-questioned tribal traditions and vanities. Then, no doubt, they do a little shopping and argue about dinner.
“‘The Lottery’ takes the classic theme of man’s inhumanity to man and gives it an additional twist: the randomness inherent in brutality,” wrote New Yorker writer Ruth Franklin in a 2013 retrospective. “It anticipates the way we would come to understand the 20th century’s unique lessons about the capacity of ordinary citizens to do evil — from the Nazi camp bureaucracy, to the Communist societies that depended on the betrayal of neighbor by neighbor and the experiments by the psychologists Stanley Milgram and Philip Zimbardo demonstrating how little is required to induce strangers to turn against each other.
“In 1948, with the fresh horrors of the Second World War barely receding into memory and the Red Scare just beginning, it is no wonder that the story’s first readers reacted so vehemently to this ugly glimpse of their own faces in the mirror, even if they did not realize exactly what they were looking at.”
And although she died in 1965, I don’t think 21st century America would surprise Jackson much.  She described the tone of the first letters she received as “…a kind of wide-eyed, shocked innocence. People at first were not so much concerned with what the story meant; what they wanted to know was where these lotteries were held, and whether they could go there and watch.”
Posted by Dan Hagen at 3:52 AM No comments:

To Live and Die in Las Vegas

When I heard early this morning that some sniper named Stephen Paddock had shot 50 people to death at an open-air concert in Vegas and wounded another 200, I was sure of only one thing: that Fox News would already be huddled somewhere with the NRA, carefully crafting lies to broadcast about the gun massacre.
I turned to CBS News, and watched the talking heads discussing regulations to prevent such American mass shootings.
HOTEL regulations, of course.
I didn’t know whether to laugh or cry.
A child shoots up a local high school. A gun-worshipping politician returns to Congress after being gunned down while playing baseball. Some sniper gets himself all cozy on the 32nd floor, killing 50 people and wounds another 200 at a country music concert.
Why, there’s nothing to see here, folks! Just another typical week in America. None of this has anything to do with GUNS, certainly!
The NRA will assure us, as it always does, that more guns will solve the problem. But gee, it’s kind of hard to shoot back at a sniper on the 32nd floor, isn’t it? Maybe the NRA will suggest all Americans need concealed carry shoulder-fired rocket launchers now.
The timid, sold-out corporate media reporters can actually look at the hundreds of people screaming and running and pissing their pants in Vegas, and then dare tell us this isn't “terrorism.”  Of course it’s terrorism. It’s NRA terrorism.
The NRA wants us to get accustomed to American mass shootings with unlimited numbers of victims. Forget about it, treat it as routine, file it on the back page with boil orders and bake sales. No amount of slaughter, even if it’s dozens of children having their brains blown out, will ever be enough to justify the least interference with their gun rites.
Not rights.
“Rites.”
But never fear, Congress is sure to address the Las Vegas sniper massacre soon — by legalizing silencers.
And by next week, some Republican will gunsplain to me, with great confidence, how the Las Vegas sniper massacre was nothing but a hoax.
Posted by Dan Hagen at 7:47 AM No comments: