What Democratic Socialism Is 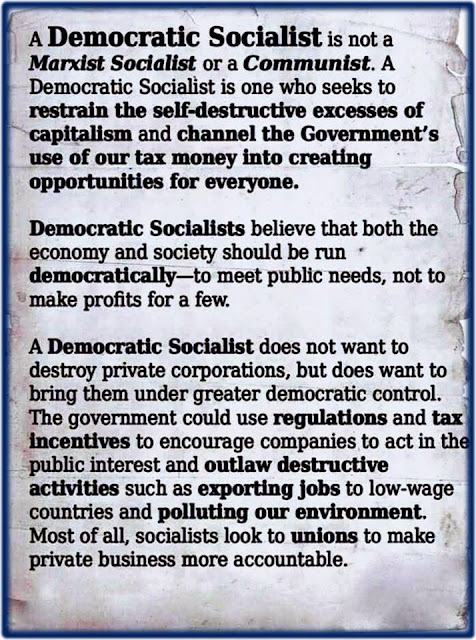 Dwight D. Eisenhower often worked long hours on stressful military assignments that took their toll. He’d suffer from back pain, stomach ailments, headaches and diarrhea.
“There was the Ike who showed up smiling for work each morning and his twilight twin, the Ike who went home looking drawn each evening, complaining to Mamie that he felt unwell,” wrote his biographer Geoffrey Perret.
He found ways to cope. One was by learning to fly a plane, flight being a perfect psychological metaphor for rising above responsibilities. Other escapes included golf, bridge, poker, painting, keeping a diary and grilling steaks.
Eisenhower read serious books like Eric Hoffer’s The True Believer and relaxed each evening by reading a western for a half hour before going to sleep.
Later in life, he would watch two or three films a week in the basement movie theatre of the White House.
“His favorite films, like MacArthur’s, were always westerns,” Perret noted. “He famously got so involved during a screening of High Noon that when the bad guys thought they had trapped Gary Cooper in a burning building, Eisenhower shouted, ‘Run! Run!’ Once Cooper had made good his escape, Ike turned to Mamie, exhilarated but relieved. ‘I never thought he’d make it!’”
Eisenhower told students: “Unless each day can be looked back upon as one in which you have had some fun, some joy, some satisfaction, that day is a loss.” And to permit such a thing is wicked, he said firmly.
Posted by Dan Hagen at 4:14 AM No comments:

The Girl Who Sued the Hornet's Nest

All carefully detailed fact, it reads a little like Homeric fiction — a young woman’s odyssey from her Himalayan home where the villagers eat only what they can grow or raise to the darkly polished corridors of power in Washington, D.C., and Houston.
There, she must confront contemporary corporate power as formidable as any Cyclops. It’s the predatory Goliath KBR Halliburton, Vice President Dick Cheney’s no-bid, no-accountability corporate pet.
In The Girl from Kathmandu, investigative reporter Cam Simpson reports how he solved the mystery of why and how a dozen innocent young men from one of the remotest parts of the world finished up kidnapped and murdered in Iraq, in a war they’d barely heard of.
In the process, Simpson’s writing draws us into Nepal’s village life, hard and precarious and primitive but honest — particularly in contrast to the corporate machinations that would con and kill Kamala Magar’s husband, Jeet.
As difficult as village life can be, Kamala would learn that it’s nowhere near as cruel as the forces of globalization powered by implacable corporate greed.
Like the other hopeful, defrauded families from Nepal, Kamala’s had borrowed heavily to “buy” a fictional job for her husband. What they didn’t know until too late was that A) workers were often paid less than they were promised, B) kept under house arrest with their passports seized and C) subjected to a bait-and-switch on the destination where they would put in their 12-hour workdays.
In other words, they paid through the nose to become indentured servants.
“Not only were the jobs in Jordan, but the sons and husbands of the families I met were sent across another international border and into a third country, a nation that was host to the world’s deadliest war zone,” Simpson wrote.
“Bundled into an unprotected convoy, without any security precautions, they were driven into Iraq against all public warnings issued by the U.S. government and against all common sense — even though they were apparently headed there to serve the U.S. government. It is difficult to imagine a greater disregard for their lives.”
Jeet was among a dozen Nepali men between the ages of 18 and 27 who were recruited and held against their will in this human trafficking scheme. Baited by high-end jobs in a Jordanian hotel, they were in fact sent to Iraq, where they were promptly murdered by insurgents — viciously and on video.
Simpson’s writing flows clearly and smoothly, like the water from the taps of a mountainside village well. He’s telling three tales that converge, weaving them like Kamala at work at her loom in a widows’ ashram.
Simpson recounts his own detective work in piercing the corporate smoke screen that hides human trafficking. He reports Kamala’s experience as a shunned and alienated teenage widow with a small daughter, helped by no one, seemingly with no place left in the world. And he profiles Matthew Handley and Agnieszka Fryszman, two workaholic human rights lawyers.
In this dark tale, light is provided by the admirable professionalism and moral character of some of those involved — by Kamala’s own tremulous courage, and by the determination with which Simpson and the plaintiff’s lawyers pursue the factual truth about and justice for people from the other side of the planet, the exploited and impoverished human beings that U.S. corporations and contractors shipped and discarded like so much cheap, damaged goods.
Posted by Dan Hagen at 10:11 AM No comments: