Jake Cole Shines in the Darkness of 'Macbeth'


Let us speak freely, our hearts each to the other. I have to tell you how excellent Jake Cole was as Macbeth at Eastern Illinois University — scornful, graceful, with an intelligible veneer of Scots accent and his naturalistic acting style easily illuminating the meaning of the arcane text for an audience unfamiliar with Shakespeare. He brought dark drama, madness and even humor to the role.
I should also mention the way Jake effortlessly springs onto the stage at one point in a standing jump — a purely theatrical touch, made possible by his athleticism, which prompts a satisfying gasp from the audience. Bravo.
And to our Sean Copeland too, with an amusing drunken turn as Lennox.
The play also contains one of my favorite lines: "Receive what cheer you may. The night is long that never finds the day."
Posted by Dan Hagen at 11:00 AM No comments:

An Opinion from the Vault of Time

Invasion of the Fox News Fogies 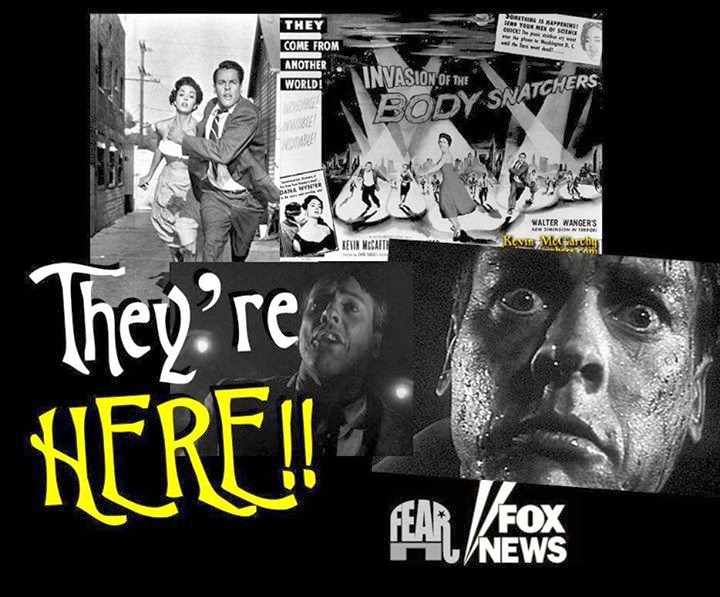 “We’re losing people like my father to the despair of Fox News, and it’s all by design,” wrote Edwin Lyngar.
“Let’s call it the Fox News effect. Take sweet, kindly senior citizens and feed them a steady stream of demagoguery and repetition, all wrapped in the laughable slogan of “fair and balanced.” Even watching the commercials on Fox, one is treated to sales pitches for gold and emergency food rations, the product cornerstones of the paranoid. To some people the idea of retirees yelling at the television all day may seem funny, but this isn’t a joke. We’re losing the nation’s grandparents, and it’s an American tragedy.”
Propaganda works, my friends. The Big Lie works. That's why, sans honest journalism, we've had it.
Posted by Dan Hagen at 7:19 AM No comments:

The pop music of the 1980s “...had immensely seductive ideas about sex, relationships, family life, work and personal style. It told us that nothing should stand in the way of having a good time. If anyone tells you to knuckle down, to work hard, to put others first, to feel sorry or ashamed, to think of the future - ignore them. They are conformist oppressors who don't know what life is really about. It is an addictive outlook. It picks up accurately on what, at moments of high excitement, feels like the truth. It lashes out at anything that causes resentment, boredom or disappointment.” And it’s all dead wrong.
Here, philosopher Alain de Botton talks about someone who fell off the stage of pop music stardom onto the substance of reality.
Posted by Dan Hagen at 3:44 AM No comments:

Recall the Weekly Wisdom of Meet the Whores 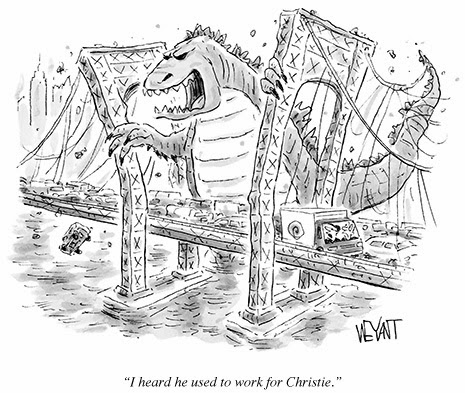 On NBC's Meet the Press (11/10/13), Time reporter Mark Halperin had this to say about New Jersey's Republican governor: "Chris Christie is someone who is magical in the way politicians can be magical, like our last three presidents."
Do tell me more, oh Mark the Whore.
Posted by Dan Hagen at 5:48 AM No comments:

Not So Fast, Nietzsche 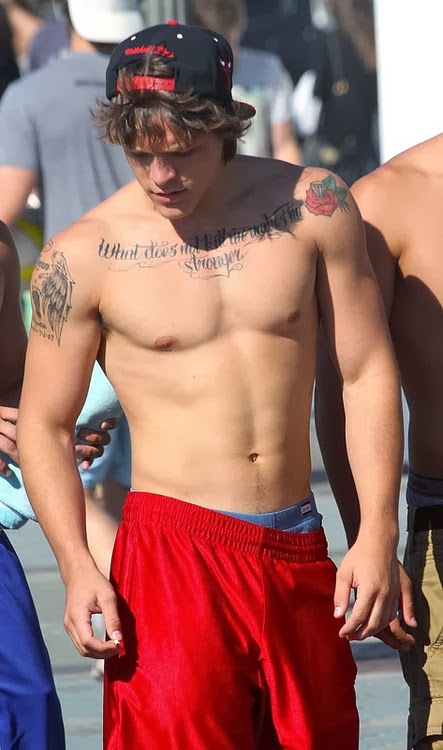 Those who approvingly cite Nietzsche’s quote that “That which does not kill us makes us stronger” tend to forget what Nietzsche forgot — that what doesn’t kill us can, however, cripple us for life.
Posted by Dan Hagen at 6:01 AM 1 comment:

How to Remain Pointlessly Distracted 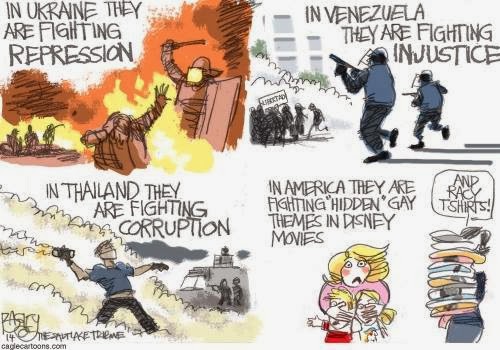 Remember? When Bill Clinton was in office, right-wing Republican gooney birds like the Rev. Jerry Falwell were shrieking how terrible it was that one of the Teletubbies was "gay." That's what those Fox-fed lunatics thought was important at the time -- ridiculous speculation about the theoretical sexuality of children's television characters who have no genitalia.
Well, after eight interminable years in power, the Republicans left us with plenty of real, worldwide horrors to worry about.
Posted by Dan Hagen at 2:55 AM No comments:

Fox News: Not Even Planetary Destruction Gives Them Pause

"A producer for the O'Reilly Factor is 'under a very tight deadline' to disprove global climate change" — in other words, to find and peddle lying, irrational propaganda to endanger millions of lives and the future of human civilization.
If you've got a better working definition of evil, let's hear it.
We just had a 60-degree day in central Illinois on Feb. 20, but I guess that won't help Bill beleaguered producer, eh?
Posted by Dan Hagen at 3:32 AM No comments:

Ordinary 1950s kids with movie-star dads, they felt that they were competing with the world for the attention of their fathers and yet found themselves a little intimidated by the spotlight-intensity of that attention when they finally got it.
The worst thing was that unthinking question from adults: “Are you really Burt Lancaster/Kirk Douglas’s son? You don’t look anything like him.”
Joel finally came to see that the lives of both fathers were “…organized around controlling and hiding their fear and surviving.”
“Burt was a good man, a strong man, not a killer,” Joel recalled. “Most killers are weak, they’re manipulative, figure out the situation and go for throat. The strong guy takes what’s dished and keeps pushing his principles and ideas forward. Bill and I used to fantasize that our fathers were carpenters or plumbers where they knew we loved them for them and not because they were superstars and they came home every night at five and the only problem was getting food on the table and it seemed so clear.”
Source: “Burt Lancaster: An American Life” by Kate Buford
Posted by Dan Hagen at 3:24 AM 1 comment:

The Adventures of the One Rich Guy Who Owns Everything

“I remember when we had schools and police and fire departments! Why there were STREET LIGHTS out in front of your house at night!”
“What’s a ‘house?’” 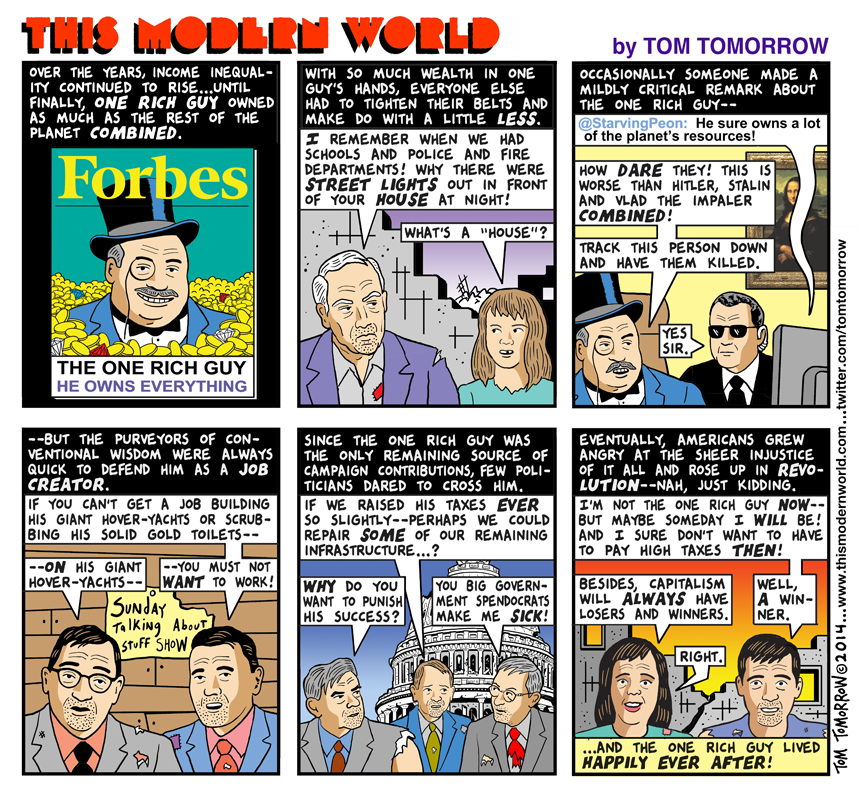 
Actor James Coburn, who’d last been seen “shacked up in Greenwich Village,” managed to borrow the money to get himself to L.A. after his college buddy Robert Vaughn convinced director John Sturges that Coburn would be perfect for a role the director was desperate to fill in a film called “The Magnificent Seven.”

“Coburn used his first big paycheck from the picture to buy a brand-new sports car,” Vaughn recalled. They drove it to a double date in Cuernavaca, Mexico, at “a local dive called Las Manaitas.”
“At the door of the restaurant, a red-vested valet, all bows and smiles, took Jimmy’s car,” Vaughn wrote. “I was nervous about this — we weren’t in L.A. — after all, but in semi-lawless Cuernavaca. Jimmy laughed at me, and all seemed well when we came back out after an evening of merrymaking. Jimmy handed over five hundred pesos, and the valet scurried off into the midnight darkness to fetch the car. In a few moments, we saw headlights rushing toward us.
“’Isn’t he going awfully fast?’ I exclaimed. As we scrambled for safety, the car roared past us and smashed into the wall of the restaurant, not 20 feet away. The women screamed, the car’s front end imploded in a tangle of crushed and broken metal and glass, and the valet fell headfirst out of the driver’s-side door. Apparently he’d been doing some merrymaking of his own.
“Jimmy just looked at his watch, clapped me on the shoulder and said, ‘I tell you what, Roberto — we’re never gonna get a taxi at this time of night.’”
James Coburn. As free-spiritedly cool as Flint.
Source: “A Fortunate Life” by Robert Vaughn
Posted by Dan Hagen at 10:34 AM 1 comment: