Another Look at the Monster at My Window 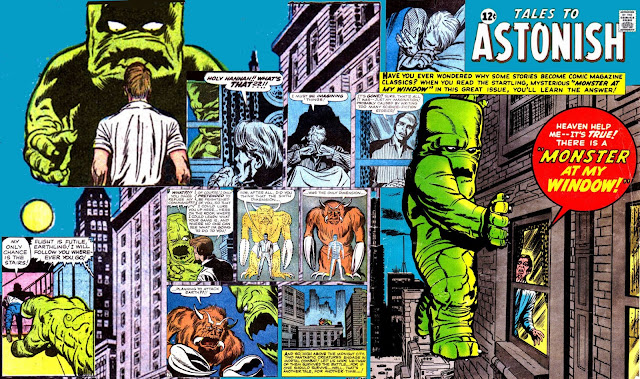 There’s something about the thing that’s inexorably approaching that can send a particularly keen frisson of fear straight up our spines.
I remember being impressed by this dramatic technique as a boy watching the otherwise undistinguished science fiction horror 1958 film Monster on the Campus. A woman walking home alone in the evening looks behind her and sees a shadowy, stalking figure moving furtively from tree to tree. Yikes!
The classic 1963 Twilight Zone episode Nightmare at 20,000 Feet, based on a short story by Richard Matheson, frightened a generation. Passenger William Shatner — frightened by some thing, some creature he sees out there on the wing of the airliner — draws the window curtains. Overcome by curiosity, he yanks them open again to find the monster with its face pressed to the window, staring straight at him.
In a 3rd Rock from the Sun sitcom episode from 1999, Shatner, making his first appearance on the series, tells John Lithgow he saw something horrifying on the wing of the plane he just departed. Lithgow replies, “The same thing happened to me!” Lithgow had played the Shatner role in 1983’s Twilight Zone: The Movie.
The trick works well in literature, too, as in Fritz Leiber’s 1941 short story Smoke Ghost. A man traveling home on the elevated train spots a vaguely menacing black thing on the rooftops that grows closer each day, as he passes. “Leiber very deftly captures that particular experience of riding home at night along suburban train lines, looking out over the roofs and seeing a peculiar high-rise world that is invisible from street level,” critic Maureen Kincaid Speller observed. 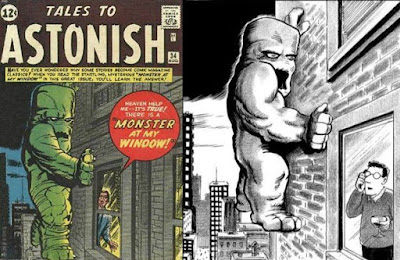 But my favorite example of this technique is Jack Kirby’s 1962 cover to Tales to Astonish 34, illustrating Monster at My Window. A hulking alien is crawling across the high ledge of an apartment building toward a frightened man at his window. The cover was memorable enough to earn a 2008 cartoon contest homage from New Yorker cartoonist Harry Bliss. By the way, the winning caption by Patrick House read, “O.K. I’m at the window. To the right? Your right or my right?”
Actually, the technique goes at least as far back as 1797, when by the English poet Samuel Taylor Coleridge wrote The Rime of the Ancient Mariner:

Like one, that on a lonely road
Doth walk in fear and dread,
And having once turn'd round, walks on
And turns no more his head:
Because he knows, a frightful fiend
Doth close behind him tread.