When Batman Was a Robot 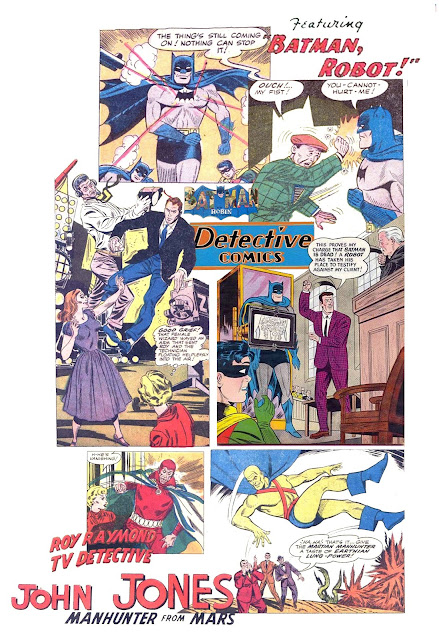 Batman’s apparent replacement by a robot was somewhat ironic, given the fact that the people working on Detective Comics 21 years after Batman’s debut were by 1960 largely going through automatic, repetitive motions.
Batman had fallen under the shadow of DC Comics’ star Superman, whose popularity had been sustained and enhanced by immensely popular movies and radio and TV series. Ideas cross-pollinated, sometimes appearing first in Batman titles and other times in Superman’s, but leaving the impression that the Masked Manhunter was a knockoff of the more famous Man of Tomorrow. Sometimes the original idea came from elsewhere, for example Fawcett Comics’ once-popular, now-vanished Captain Marvel (Mary Marvel, for example, preceded Batwoman and Supergirl, just as Captain Marvel Jr. anticipated Superboy).
Superman, under editor Mort Weisinger, had acquired a Supergirl, a Superdog and robot doubles. Batman, under editor Jack Schiff, got himself a Batwoman, a Bat-Girl, a Bat-Hound and his own robot double. Superman’s annoying fifth dimensional imp Mister Mxyztplk had his counterpart in Batman’s cloying fifth dimensional imp Bat-Mite.
Both heroes were subject to frequent alien encounters and transformations, with Batman, Robin and friends acquiring Superman-like powers almost routinely. In a role reversal, Superman acquired a Fortress of Solitude that echoed Batman’s longstanding Batcave with its giant weird souvenirs. But the universe of aliens, robots and magic in which Batman found himself in the late 1950s was Superman’s, not his.
It was a situation that had to change, and would with 1964’s Schwartz-Infantino “New Look” for Batman.
Nevertheless, this Batman was my first, and the Detective Comics of this era was my favorite anthology title. In addition to Bill Finger and Sheldon Moldoff’s Batman and Robin, you got Joe Certa’s blue-caped, green-skinned Martian Manhunter with his plethora of exciting superpowers and TV detective Roy Raymond, who faced off against weird menaces made vivid by the gorgeous art of Ruben Moreira. Raymond’s feature went all the way back to 1949, but by Detective Comics 281 his fictional TV show was nearing cancellation. By Detective 293, he’d be squeezed out to make room for Aquaman.
Posted by Dan Hagen at 5:22 PM