The Trump Card's a Joker, And the Joke's on Us 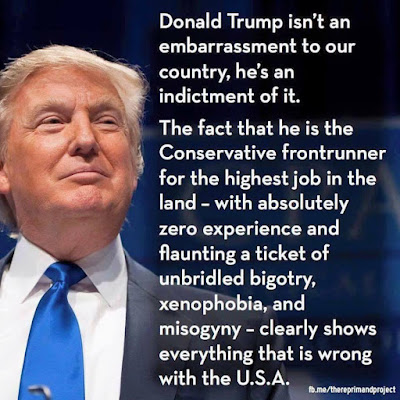 The Republican presidential front runner Donald Trump is not a disease in the American body politic. He is its symptom, a festering sore finally so obvious that even the disease’s deniers find denial impossible.
Trump has marched ahead of the other GOP presidential candidates by out-fascisting them. He has been rivaled only by the equally fascist torture lover Ben Carson. In a political party in which fascism is fashionable, the most flagrant fascist is Il Duce.
Trump speaks approvingly of the Russian habit of having journalists murdered. Proto-tyrants like Trump resent constitutions and the rule of law as impediments to their will. Absolute power must arbitrary. That’s what gets them hot.
For 15 years, since the stolen election of 2000, I have endured sneers from people who pooh-poohed my observation that the Republican Party was aimed straight at full-blown, totalitarian fascism, complete with torture and summary execution. Where are their “centrist” sneers now that insulting the disabled and torturing the helpless are favorite GOP hobbies. Trump is, in that sense, the fulfillment of the Republican dream.
It's so odd. Ever since I've been aware of Trump, for decades now, I've recognized him as a dimwitted vulgarian with a needy ego, the kind of person you feel a little sorry for because he constantly embarrasses himself but is too unaware even to know that. What astounds me is that his fans can't see something that is so glaringly obvious. Trump's pathological insecurities are apparent, but only to relatively secure people. Donald Trump’s ego would eat the entire world if it could, burp, and then remain hungry. Something so empty can never be satisfied.