The Experimental Hulk, circa September 1962 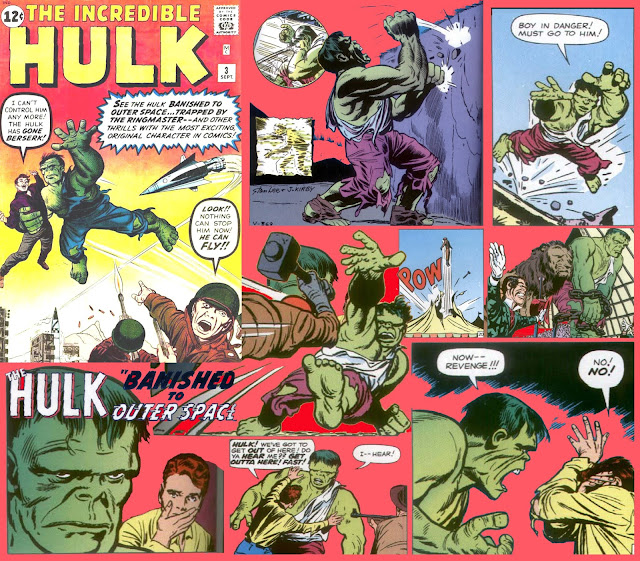 By the third issue of the second title of the Marvel era, The Incredible Hulk, it became clear that Stan Lee and Jack Kirby were flying by the seats of their pants here, but doing so brilliantly.
Marvel’s early comic books had an experimental quality rivaling that of the first superhero comics in the late 1930s. It began with the Fantastic Four in 1961 — conflicted heroes, unburdened by credibility-straining comic book conventions like costumes and secret identities, who regarded their powers and each other warily.
The group’s most popular character was probably the embittered man-monster, the Thing, so Kirby and Lee swiftly retooled the concept into a solo title about a man-monster that arrived on the newsstands in May 1962, at the same time as the FF’s fourth issue.
A gamma bomb blast transformed the coldly rational physicist Dr. Bruce Banner into a creature that looked vaguely like the Universal Films Frankenstein monster, an image popular with the era’s children thanks to frequent appearances on the Late Show. But the character shared a tragic fate with another doctor, Henry Jekyll, and Universal’s Wolf Man. Banner’s powerful dark side would emerge each evening as the sun set.
Oddly, the first Marvel character to have a secret identity was the one who’d find it most difficult to maintain one. But with the help of Rick Jones, a teenager he’d rescued, Banner somehow managed it. The scenes of Rick slumped forlornly in front of a massive underground bunker, protecting the creature who pounded relentlessly on the walls inside, have a poignant and despairing quality rarely seen in comics at the time.
In his second issue, in July 1962, the Hulk faced an alien invasion. The monster wasn’t capable of repelling it, nor was he interested in the task. Expressing his hatred for humanity, the Hulk mused about seizing an alien spaceship and raining terror on his own planet. Banner had to play the hero, proving himself more powerful than the Hulk when he constructed a massive Kirbyfied gamma gun that hurled the entire invasion fleet of Toad Man away into space.
By the third issue, the plot constraints of having a hostile character who only gained his powers at night were discarded. Duped by the military into betraying the Hulk, Jones lured him into a space capsule and banishment. But intense solar exposure combined with an electrical accident changed Banner into a full-time Hulk, while giving him a telepathic link to Jones that made him subject to the teenager’s will. Now another flavor of fantasy was offered as the Hulk became a kind of genie ruled by a boy. And to further up the wish fulfillment ante, Lee and Kirby took a page from the earliest Superman comics and gave the Hulk the effective power of flight through seven-league leaps. Such changes would continue through all six issues of the Hulk’s first comic book series, and the character’s flexibility saved him when his title ended. Kirby and Lee kept him in the public eye as an antagonist fighting other superheroes like the FF, Spider-Man, the Avengers and Giant-Man.
Posted by Dan Hagen at 12:53 PM