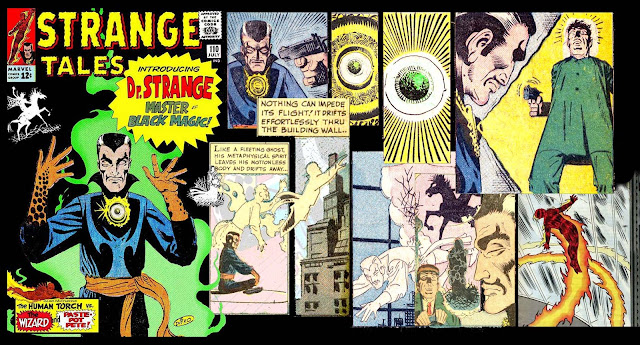 The first time I saw Dr. Stephen Strange was the first time any reader saw him. I was 8 when the magician arrived unheralded in the back pages of Strange Tales 110 in July 1963.
Astral projection, entering people’s dreams, battling a shadowy horror-movie figure named, appropriately, Nightmare — in a mere five pages, this character proved himself to be a superhero who was different and distinct, yet another from a comic book company, soon to be called Marvel, that somehow kept turning them out.
As the series continued, we’d see just how strange his milieu was, as the sorcerer visited other ominous dimensions where weird, twisted and ominous shapes hung suspended, obeying vastly different laws of space and time.
“(H)is otherworlds were vast open spaces with no up or down, no horizon or vanishing point, only floating pathways linking one aerial island to another,” wrote Gerard Jones and Will Jacobs in their excellent book The Comic Book Heroes.
“These pathways were impeded by doorways set in space, where disembodied snake-jaws waited to snap down on the unwary traveler, guarded by legions of mindless, horrid creatures harkening to the commands of dark lords. Battles were never fought with fists and feet, but with incantations… with plasmic blasts of mystic force, with undulating webs of magic, with hypnotism and astral projection. The effect of these brief, tightly plotted stories was an eerieness that bordered on the hallucinatory, a genuinely disturbing air very rare in comics books.”
Looking back, I can see that those scenes also represented an interface between artist’s Steve Ditko’s bizarre, powerful imagination and the ordinary world (a contrast you can also see in his later work for DC on Shade, the Changing Man).
Another intriguing angle was that Dr. Strange was a secret champion, a lone defender who stood bravely against eldritch Lovercraftian forces that were constantly plotting to invade, enslave and corrupt this plane of existence. The people who brushed past him on the streets of Greenwich Village would never know that he alone had saved them and their loved ones from madness and destruction, time and again.
His origin, when we learned it, was equally fresh. An arrogant and egotistical surgeon whose steady hands had been ruined in an accident, he sought out the Ancient One high the mountains of Tibet for desperately selfish reasons. It was only as he gained his arcane powers that he also gained compassion, enlightenment and purpose.
The romance and tragedy of Dr. Strange’s situation was well expressed by director-writer Philip DeGuere near the close of the 1978 Dr. Strange TV pilot movie, when Stephen Strange, played by Peter Hooten, asks his mentor Lindmer, played by John Mills, what choice he has.
“To serve yourself, or all of mankind,” Lindmer replies.
“Is that a choice? What will I be called upon to do?”
“Become more than a man,” Lindmer replies. “And to renounce such earthly pleasures as are given to men who are only mortal — the pleasure of ignorance, or offspring, or an easy death.”
“Will I be asked to give up even love?”
“The universe is love,” replies the ancient one. “That, you shall have.”
Posted by Dan Hagen at 2:38 PM