The Black Widow: From Siren to Superhero 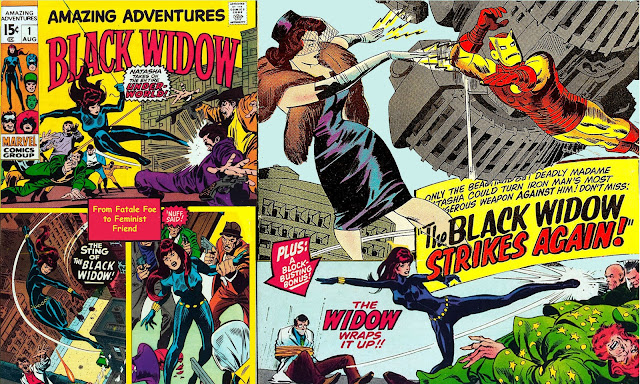 Marvel Comics’ Black Widow, in the first six years of her fictional career, moved from minor villain to headlining hero. Over the same span, her dramatic journey paralleled the advancement in the status of women across the 20th century.
Created by Stan Lee and Don Heck in Tales of Suspense 52 (April 1964), Natalia Alianovna “Natasha” Romanova was introduced as a Russian communist spy, a foe of capitalist industrialist superhero Iron Man.
She wasn’t a costumed character but a beautiful “femme fatale,” an archetype created by male writers that represents a woman’s sexual attractiveness to men as a siren threat, a weapon. Dashiell Hammett’s Brigid O'Shaughnessy, from the 1929 novel The Maltese Falcon, is a classic of the type, seducing several men to their doom. The femme fatale has often amounted to a nightmare view of female independence and confidence.
But Betty Friedan’s book The Feminine Mystique, credited with sparking the second wave of American feminism in the 20th century, was already a year old when the Black Widow debuted. So, by the end of the decade, the character was transformed from a slinky villain into a playgirl feminist superhero with her own feature in Amazing Adventures.
Defecting to the U.S. and trading espionage for superheroics, Natasha had settled by 1970 on a costume that consisted of a skintight black catsuit and wristband weapons. Already spider-themed, the character naturally became the first of several female counterparts to Marvel’s most popular superhero, the first of several fully feminist Marvel superwomen and finally a Hollywood hero.
Posted by Dan Hagen at 2:49 PM