The First Time I Saw the Spectre 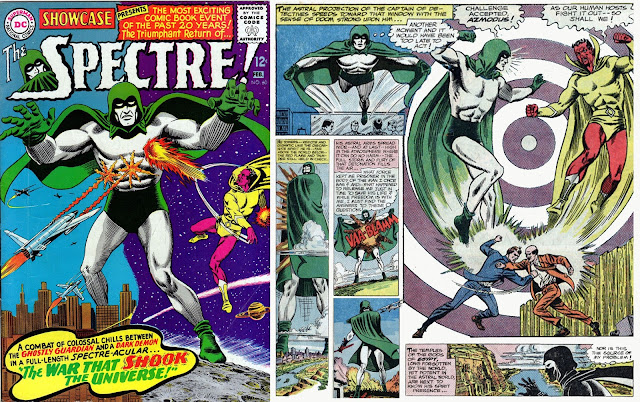 In the mid-1960s, DC Comics’ house ads created quite a considerable drum beat for the Spectre, heralding his first Silver Age appearance in Showcase 60 (Feb. 1966).
It was a reappearance, really, because this wasn’t a retooled, updated version of a Golden Age hero like the Flash, the Atom, Green Lantern and Hawkman, but the original 1940s Ghostly Guardian who, we learned, had been trapped in his human host body for two decades. The art was sumptuous — Murphy Anderson at the height of his form — and the story of The War That Shook the Universe! was the usual fact-peppered super-science stuff that writer Gardner Fox could handle in his sleep (while salting it, this time, with a tinge of the supernatural).
But the Spectre’s audition issues led to only a short-lived title. Something was off, and it was the same something that sometimes troubles the characters Dr. Fate and Dr. Strange.
Jerry Siegel’s Superman was the premiere, the most popular and the most powerful superhero by early 1940, when Siegel debuted his second such character, the Spectre. So how do you top Superman?  With super-Superman, a ghost bent on justice who could grow, shrink, vanish, read minds, catch comets and cause death with a glance. And therein lies a plotting problem, because omnipotence is a condition that contradicts suspense. Dr. Fate, Dr. Strange and the Spectre all have vast but ill-defined powers that always make it somewhat difficult for readers to believe them to be in any understandable peril. The fact that their publication histories have been sketchy is, I think, no coincidence.
Posted by Dan Hagen at 6:45 PM