Let the Rich Beware the Raven 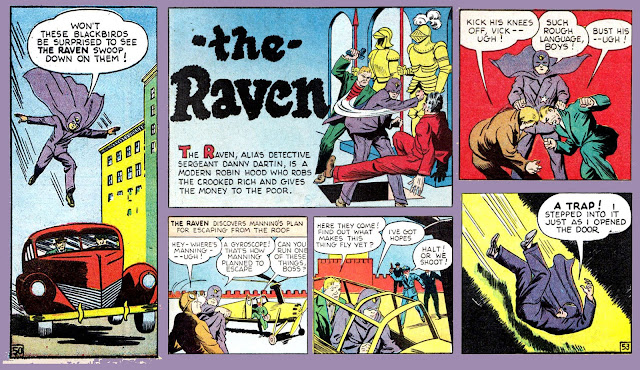 A costumed vigilante called The Raven who battles evil one-percenters? How could I resist a character like that?
The Raven (who first appeared in Sure-Fire Comics 1 in June, 1940) was really New York City Detective Sgt. Danny Dartin. With the aid of the police chief’s daughter, Lola Lash, he sprang into action as a 1940s Robin Hood, stealing money from criminals and redistributing it to the poor.
The Raven was based on an even weirder pulp hero, the Moon Man. Operating in the depths of the Depression, from 1933 to 1937, the Moon Man donned a spherical helmet of Argus one-way mirror glass as a mask, along with a black robe and gloves. He, too, robbed criminals, distributed the money to the poor and was pursued by his police pals, who didn’t know he was really Detective Sgt. Stephen Thatcher, son of the police chief.
Posted by Dan Hagen at 10:16 AM