The Secret Origin of Superman 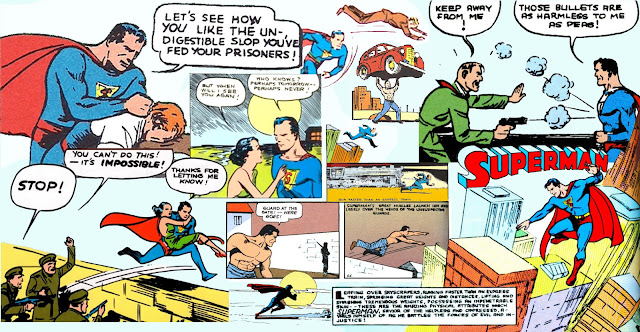 Fascinated though I was by Superman when I was a small boy in the late 1950s, I had no idea where he came from.
My grandmother helped me out with that, recounting Superman’s origin for me — the doomed planet, that poor vulnerable infant in the rocket, the kindly Kents and their adopted son who could haul wagons like a team of horses and find lost objects by peering through hay stacks. She’d seen the story only once, a dozen years before in the 1948 movie serial Superman, but remembered it all vividly.
Interesting to note that in the 1948 serial, young Clark Kent saves his foster father from a tornado. But in the 2013 film Man of Steel, he deliberately lets him die in one. Times, as they say, have changed.
Superman (as an adult or as Superboy) was featured in seven DC titles at the time — Action Comics, Superman, World’s Finest, Superman’s Girl Friend Lois Lane, Superman’s Pal Jimmy Olsen, Superboy and Adventure Comics — yet information on his early years remained oddly hard to come by.
Even when DC began reprinting Superman’s adventures in the first giant 25-cent annual in 1960, the 1930s and 1940s stories were ignored. Superman editor Mort Weisinger said that was because the art was “crude,” but I suspect it was in fact because the legendarily unfair and nasty Weisinger was trying to erase Superman’s creators, Jerry Siegel and Joe Shuster, from history.
So I didn’t start seeing Superman’s earliest adventures until about 1965, when cartoonist Jules Feiffer published his hardcover revelation, The Great Comic Book Heroes. There, among other wonders, was the complete account of how Superman saved the Valleyho Dam from a flood in Action Comics 5 (Oct. 1938).
And yes, the art may have been crude, but it was vital and dynamic in a way that the polished, static Silver Age Superman stories were not (as some wag once said, Superman stories had started to look as if they were being drawn in a bank).
Red cape streaming like a banner, Superman sprang, sped, soared, smashed, in constant exciting motion like the Marvel heroes who were about to overtake DC in popularity. He was not the omnipotent, blandly benign figure he’d evolved into by the 1950s. He couldn’t fly, he could be hurt, but you’d better get the hell out of his way.
Clearly an FDR-inspired socialist crusader spawned by the Great Depression, Superman was impatient with injustice and contemptuous of the compromised police. He dramatically deposed dictators, occasionally killing criminals without apparent regret, hurling wife beaters into walls and the owners of dangerous mines straight down into them. He dealt brusquely with Lois Lane and she loved him for it, just as she perversely (but typically) despised Clark Kent for adoring her.
The early Superman lived up to his name, a character of such emphatic momentum that walls, guns, tanks, planes, decades and even centuries could not stop him.
Posted by Dan Hagen at 1:04 PM