The First Time I Saw the Shadow 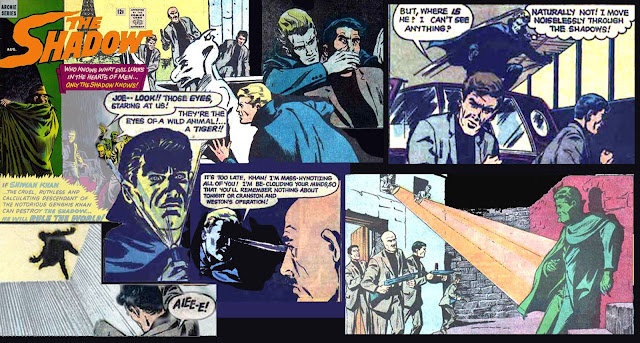 The first time I saw the Shadow was in 1964, when I was 10 and the aging crime-fighter was at a low point in his fabled career.
My parents and grandparents knew the Shadow well, but had never seen him, having listened to his adventures as an invisible superhero on radio in the late 1930s through the early 1950s. I’d also heard references to the character on television (When TV writer Rob Petrie’s wife Laura began acting mysteriously, he accused her of disappearing “…like Lamont Cranston.”)
Archie Comics had acquired the comic book rights to the Shadow, and I recognized John Rosenberger’s magazine-sleek art from the company’s other two superhero titles, The Adventures of the Fly and The Adventures of the Jaguar. The cover depicted the Shadow in traditional pulp magazine form, lurking hawk-nosed in a cape and slouch hat. But inside he’d been “modernized,” and not always to good effect.
Following President Kennedy, the men of the era had discarded their hats, and the Shadow followed the fashion. Now a prettified blond with three identities, he used his role as millionaire playboy Lamont Cranston as a cover for his activities as an American secret agent (James Bond had just become immensely popular). And his spy missions were a cover for his superhero activities, an identity he assumed simply by slipping on a black cloak and “blending into the shadows.” No one else knows he’s the Shadow, not even his girlfriend Margo Lane.
His vaguely defined powers included stealth, ventriloquism and a kind of super-hypnotism, and his opponent was his recurring arch-foe from the pulps, Shiwan Khan, restyled as a Bondesque freelance spy villain. The Shadow also displayed a hint of 007’s ruthlessness, hurling one of Khan’s henchmen down a shaft to his apparent death.
Not as good as the pulp or radio Shadows and disjointed, but not terrible. In later issues, however, penned by Superman creator Jerry Siegel, the character would hit bottom — tricked up in a superhero’s mask and tights, and armed with gadgets that would have embarrassed even Batman (a “power beam,” “weakness gas,” boot-heel jumping springs, and so forth).
Posted by Dan Hagen at 3:38 PM