The Heroes Who Save the Day in a Small Way 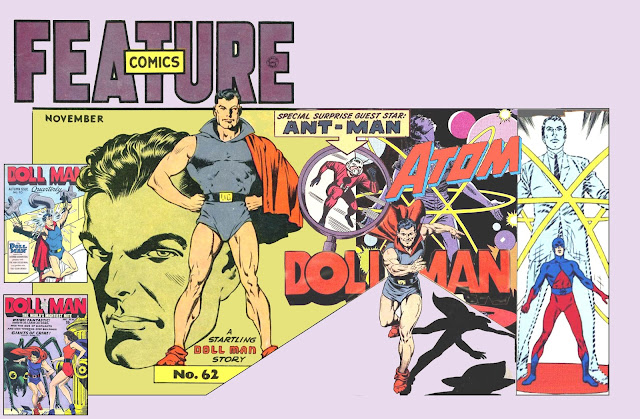 Everything about superheroes is gigantic, symbolically if not literally. They are colossal, displaying the strength of titans, flying across the landscape as if in seven-league boots, with stupendous endurance and a monumental dedication to justice and the protection of the innocent.
So the last quality you’d expect to associate with superheroes is … smallness. Yet at least three major superheroes have made it big through being tiny. That very counter-intuitiveness became part of their appeal.
Children, who are little and often pushed around by bigger people, turned to superhero comics to forget being small, to indulge in fantasies of freedom and power. Superheroes permitted them to transcend their condition, but the superheroes I’m talking about went one step further, and empowered them within their condition.
How do you turn weakness into strength, loom large while being tiny? Well, when you think about it, small targets are tough to hit. Small spies might as well be invisible. And the small may slip in where the large are barred.
The first such hero started early — in Quality’s Feature Comics 27 in 1939 — and didn’t end his run until 1953. The caped, blue-clad Doll Man, who used mental concentration to shrink to six inches while retaining his full strength, headlined Feature Comics and his own title. Like the similar later heroes, the adventures of Darrel Dane were kept interesting through semi-comical juxtapositions in size. He could ride a Great Dane like a horse, fly in a toy airplane or on an eagle, and even shrink his girlfriend to join him in his crusade as Doll Girl.
After Quality went out of business, the very longevity of the now-defunct character undoubtedly caught the interest of DC Comics and what would become Marvel Comics, once they got busy dusting off old superhero concepts for the space age.
In October 1961, in Showcase 34, DC debuted the Atom, a freshly stylized version of a Golden Age character who just been a short young guy with formidable and finally superhuman strength. But the new Atom, physicist Ray Palmer, owed more to Doll Man than he did to his namesake.
The Flash, DC’s first Silver Age superhero, was able to ring in many changes on the feats that could be accomplished with super speed, and the Atom did the same with his small stature. He could ride the wind by reducing his weight, use a telephone as an effective teleporter and shrink into subatomic worlds (where he could paradoxically appear as a giant).
In January 1962, Tales to Astonish 27 featured the spooky tale of Henry Pym, a biochemist who invented a shrinking formula and wound up trapped in an anthill. Barely escaping with his life, though the help of a friendly ant, Pym destroyed the formula — only to have to retrieve it eight issues later as Marvel shifted emphasis from monster stories to superhero tales.
Thus was born Ant-Man, who — like the Atom and Doll Man — could not only shrink and retain his strength, but also command ants like an army. Ant-Man followed Doll Man’s lead in acquiring a girlfriend who doubled as his superhero partner, the Wasp. The history of the big little superheroes has illustrated one of Stan Lee’s favorite principles in storytelling — the idea of turning a seeming disadvantage into an advantage for the character.
Posted by Dan Hagen at 5:05 PM