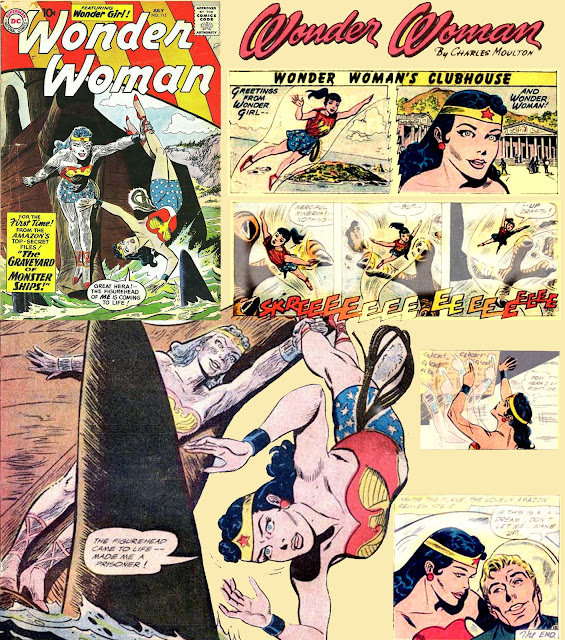 I was the first-born child of the Lone Ranger and Wonder Woman. Well, in a way, anyway. They were my parents’ childhood dream selves, just as Superman was mine.
Isolated in a farmhouse miles from town, my dad lived for the 1930s radio adventures of the Lone Ranger, wending their way across the Illinois prairie from Detroit.  He listened so intently that he could virtually recite them decades later. My mother, not quite so isolated, was able to feed her proto-feminist fantasies on the 1940s comic book exploits of the first female superman.
But the first time I saw Wonder Woman, she was slugging it out with a futuristic giant robot, along with four other members of the Justice League, in the second of the team’s tryout appearance in Brave and the Bold in May 1960. By July, I was ready to give her own comic book a try. I picked up issue 115, coincidentally the first one to follow the reader-friendly trend of offering a letter column.
So here was Wonder Girl — Wonder Woman’s younger self, just as Superboy was Superman — and Wonder Woman, who had her own Lois Lane in the form of Steve Trevor. Making goo-goo eyes at the heroine at every opportunity, Trevor didn’t cut too impressive a figure. What can you say about a guy who actually accepts the explanation, “I’ll marry you, but only after I’ve eradicated crime from the face of the Earth?” Talk about a brush-off.
I appreciated the Amazing Amazon’s strength and speed and her transparent, telepathically controlled jet, but her “gliding on air currents” power gave me pause. Even to 6-year-old, that seemed shaky at best. The flatly inexplicable power of flight somehow seemed a better bet.
Wonder Woman was drawn by the capable Ross Andru, but penned by Robert Kanigher, who wrote spare, moody combat stories for DC’s war line but bizarrely erratic and unsatisfying Wonder Woman adventures. The plots didn’t make any sense, even by comic book standards. Dinosaurs and gigantic clams and electric eels and nuclear missiles seemed to show up and disappear for no reason, and Wonder Girl displayed an unsettling taste for dating teenage males who were half-fish or half-bird.
Take this issue’s tale cover story, Graveyard of Monster Ships, for example. Wonder Woman’s enemy Angle Man — dressed strangely even by his standards in a high silk hat and purple suit, sporting a red cape decorated with astrological symbols — decided to destroy her using a “mechanical brain” (what we called computers then).
While Wonder Woman and Trevor are investigating an underwater area full of lost wooden ships, Angle Man uses his computer to animate the ships’ figureheads — including, weirdly, a Wonder Woman figurehead from a sunken Amazon ship (?). That “mirror image” theme was pursued obsessively in superhero comics, emerging from some unconscious source and repeated so relentlessly that it must have been selling comics.
Wonder Woman is able to defeat the fearsome figureheads by typing on the computer keyboard at super speed, transforming all the hostile carvings into guided missiles that launched themselves into space (?).
Even as a child, I sensed that Kanigher actively disliked Wonder Woman and just kind of threw her adventures at the wall to see what might stick there. Puzzled me
Posted by Dan Hagen at 3:26 PM