The First Time I Saw Hawkman 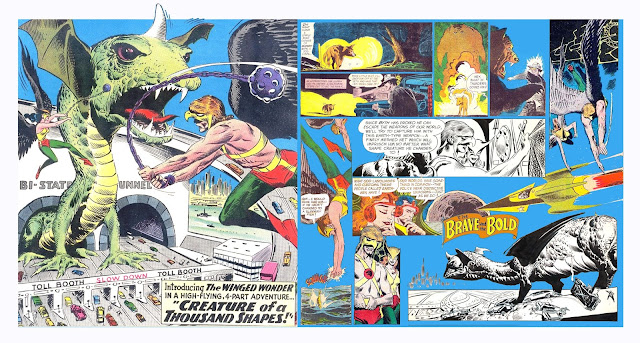 The first time I saw Hawkman, the winged wonder and his wife were fighting some kind of gigantic dragon/dinosaur that came roaring out of an urban highway tunnel in early 1961. These bird people appeared to be heavily outgunned, but undaunted. Brave and bold, indeed.
The scene was the Silver Age debut for the characters in Brave and the Bold 34, and naturally I had to have it.
“Naturally” because Hawkman had a unique and intriguing superheroic design — yellows, greens, bare-chested with big working wings and a fascinating hawk mask so striking it was almost grotesque.
I had no way of knowing that the design had also captivated my parents’ generation 20 years before, on the covers of Golden Age Flash Comics.
What The Comic Book Heroes called artist Joe Kubert’s “lean, attenuated figures” held a darkly elegant appeal, and you were never quite sure what you might see next — a forlorn dog turning into a raging bear, an aerial night view of a quiet suburb, an arrow-like spaceship, a museum diorama, a purple pterodactyl.
Monsters, heroes, ancient weapons, science fiction — that was another dime well-spent by 6-year-old Danny.
Hawkman and Hawkgirl were the coolly rational heroes typical of the Julius Schwartz shop at DC, alien manhunters with the kind of superheroic “extras” that readers like me liked to see, in their case a streamlined spaceship and an Absorbascon, a Thanagarian gadget that enables users to telepathically read the minds of sentient life forms and absorb the whole knowledge of their culture — and even, by what one would call a real stretch of the imagination, learn the language of birds. This, in the childhood mind, put the flying hero parallel to the long-running Aquaman, a swimming hero who could talk to fish. DC soon teamed them up.
The Absorbascon was another yet reflection of America’s space-race respect for scientific knowledge, something we’ve lost to our peril. Think of being able to access the entire knowledge of a world’s culture!
Well, Americans literally hold that power now in the palms of their hands, but use it mostly just to play games and take selfies. Yesterday’s wonders are today’s banalities.
On a return trip to the planet Thanagar shortly after this issue’s adventures, Hawkgirl was shown reclining while enjoying a shopping channel on a large wall-screen TV. What marvels!
Just imagine…
Posted by Dan Hagen at 9:43 AM