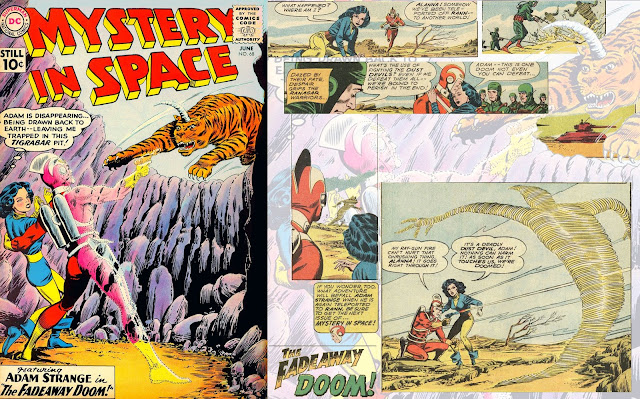 This was the cover that prompted me to buy my first issue of DC’s Mystery in Space featuring Adam Strange — No. 68, cover-dated June 1961.
The Carmine Infantino-Murphy Anderson scene showed a horned alien tiger springing even as a colorful rocket-belted hero with a ray gun was teleported away, leaving a damsel in distress. Much too much to resist.
And inside, even more! The issue introduced Strange’s recurring foes the Dust Devils — sentient, sinister, semi-anthropomorphic whirlwinds perfectly designed to inhabit the dreamlike mental landscape of a 6-year-old. And they weren’t even the main menace on the playbill. That role was reserved for Kaskor, a mastermind from Ranagar.
Adam Strange was the thinking man’s superhero of the late 1950s, rendered with a sleek, space-age elegance by Infantino and written with a reassuring respect for intelligence by Gardner Fox.
I always liked him, but I was an adult before it suddenly dawned on me that Adam Strange was conceived as an exact thematic mirror-reversal of the same company’s flagship character, Superman.
Instead of a man sent to Earth from an exotic planet to act as a savior with his superhuman powers, we have a man sent to an exotic planet from Earth to act as a savior with his human powers.
Superman overcomes all obstacles with his superior physical powers, but Adam Strange has none. Thanks to his access to alien technology, he does have a rocket belt and a ray gun, but they provide little or no help to Strange in fending off the overwhelming alien menaces that appear whenever he returns to visit his sweetheart on the planet Rann.
Lacking Superman’s brawn, Adam Strange relies solely on his brain, reasoning his way out of every dilemma, no matter how difficult. This celebration of scientifically grounded reason and flexible critical thinking is sorely needed today, in dumbed-down, shoot-first, rant-and-rave 21st century America. But for that very reason, nobody is now interested in Adam Strange.
More’s the pity.
Posted by Dan Hagen at 3:27 PM