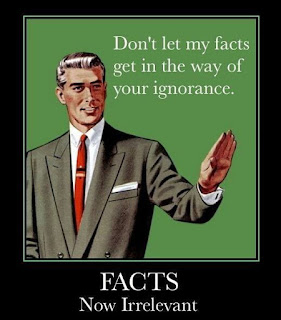 The fact-immune digital information echo chamber, a bubble manipulated by malign forces and inflated by intellectual cowardice, is the source of our current political disaster.
And no, it’s not “both sides.” The fact-free propaganda echo chamber of lies is on the RIGHT — that place where global climate change doesn’t exist, where tax cuts magically increase revenue, where Obama was born in Kenya, where women don’t get pregnant from rape because the body “has ways of shutting that that thing down.”
Fox News reporters and pundits lie about facts all the time. They are fascist propagandists. That’s WHY they pose as journalists, so you’ll believe the lies they peddle.
It is the RIGHT that expresses this epistemological philosophy for you: “On one hand I hear half the media saying that these are lies, but on the other half there are many people that go, no, it’s true,” said Trump spokesperson Scottie Nell Hughes. “And so one thing that has been interesting this entire campaign season to watch is that people that say facts are facts, they’re not really facts. There’s no such thing, unfortunately, any more of facts.”
In fact, facts remain facts. That’s what keeps Trump's supporters screaming so loudly and constantly — their futile attempt to drown out the facts.
Nor are facts “biased.” They’re simply facts. The people who toss the term “bias” around constantly are always out-and-out liars. Yet it’s those who confront lies with documented facts who are branded as liars themselves by the corrupt, the know-nothings and the moral cowards who foolishly claim that truth is only a yellow line down the middle of the road.
Unmoored from factual reality, we’re adrift in a sea of madness, just waiting to strike another iceberg in the darkness.
Posted by Dan Hagen at 3:00 PM