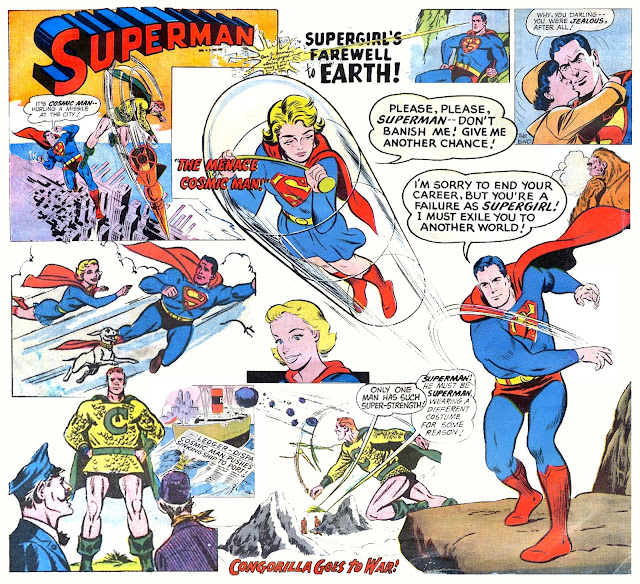 Either main story in Action Comics 258 (Nov. 1959) might have been cover-featured.
In The Menace of the Cosmic Man, writer Bill Finger and artist Wayne Boring confronted Superman with another of those mirror images that appear constantly in Silver Age superhero stories. This time it’s Cosmic Man, who was really a robot designed for an assassination plot. Lois Lane even gets the rare treat of kissing the big guy, but only because he had to feign jealousy to protect his secret identity.
But the cover spot went to the Supergirl story, Supergirl's Farewell to Earth!, and it showed the Maid of Might being hurled into space because she’s displeased Superman. Seems strange to us now, in this post-feminist era, that she’d so meekly accept banishment as the price of violating Superman’s arbitrary rules. Writer Otto Binder and artist Jim Mooney turn the tables in the tale, however. It’s all been one of Superman’s many elaborate hoaxes, this one designed to see if Supergirl can be trusted with the secret of his identity. The fact that Supergirl had already discovered he was Clark Kent left Superman red-faced in the final panel.
The issue’s third feature starred Congo Bill, DC’s answer to Alex Raymond’s Jungle Jim and a character who’d been kicking around since 1940. In January of 1959, in a nod to the renewed popularity of superheroes, a witch doctor granted Congo Bill the power to switch minds with a giant golden gorilla and fight as Congorilla. That became the strip’s new title, with art and story by Henry Boltinoff.
The issue also offered Metropolis Mailbag, a letter column then only a year old. Reader John McGeehan of Santa Ana, CA, wrote in to say that he was sorry that our world has nobody like Superman to make it a better place, but that he was glad we have no Lex Luthor.
Editor Mort Weisinger replied, “Amen!”
Posted by Dan Hagen at 5:05 PM