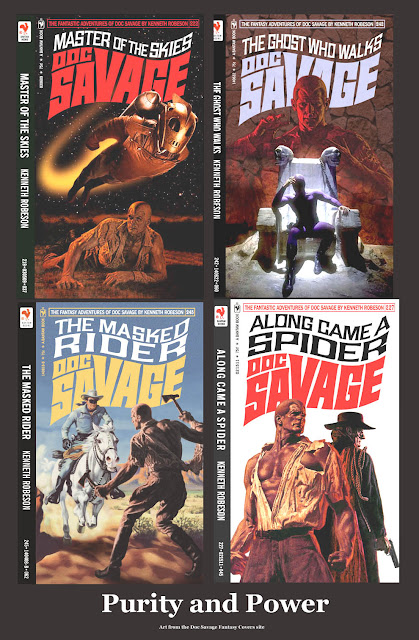 Fin de siècle French supermen like Fantomas were all rampaging Id, glorying in their elaborately planned terrorist attacks and, without hesitation, murdering anyone who stood between them and their desires.
But 1930s American pulp supermen like the Shadow and Doc Savage seemingly had no personal desires. They were all Superego, devoted to impersonal crusades for justice and/or helping the helpless — a legacy of both America’s all-business attitudes and Puritan origins that also informed westerns and detective stories, among other genres.
“Whether as conscious reflections of ideology or disguised myth, basic cultural assumptions embedded in our national mythology often appear in our popular forms of entertainment,” wrote Columbia University film professor Jim Holte in his essay Pilgrims in Space. “Puritan ideology stated that sexuality was an outward and visible sign of a corruption that would destroy any covenanted community beset with such real and immediate external dangers as the wilderness, the Indians and a seemingly endless number of heresies. To confront the terrors of the unknown and continue his mission, the Puritan needed all the discipline and resolve he could muster. No distractions were permitted. It was enough to make anyone grim.”
Posted by Dan Hagen at 8:11 AM