Keeping Up in the Age of Kleptocapitalism 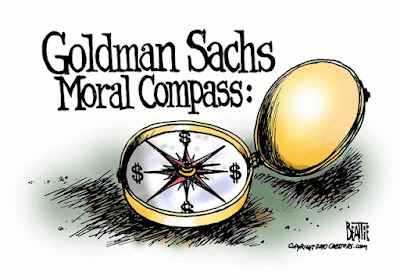 A decade or so ago, I coined the term "kleptocapitalism" is describe the 21st century America economic scheme pushed by Bush, Cheney and their co-conspirator cronies.
More and more people seem to be waking up to the concept, if not the word. This remark of mine recently got 242 “likes” on a Robert Reich thread: "This is pure kleptocapitalism — an economic system in which thieves are permitted to become so obscenely wealthy that they can bribe their government puppets into legalizing their larceny." Of course, there’s a terrific irony in the fact that a system that values property above people should devolve into embracing the systematic theft of property, but there it is. It is in the nature of corporations to place profit above all, including law and morality, so such piracy is inevitable unless governments prevent it.
Posted by Dan Hagen at 4:47 AM