Democrats Stab Themselves in the Back 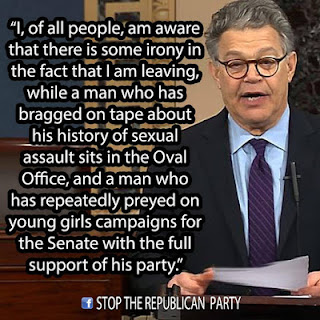 Al Franken has been forced out of the Senate because of groping accusations.
Now watch as the GOP carefully selects a fresh list of prominent Democrats to destroy with more unverified and/or easily fabricated accusations. The Republicans must be licking their lips, in between the bouts of laughter.
Where did any Democrat get the truly laughable idea that Republicans will now somehow respect their "moral authority?" What Republicans respect is POWER, and the witch hunter Democrats have just handed them more of it.
We’ve silenced a major progressive voice, leaving a sex criminal in the Oval Office and a child molester about to be seated in the Senate. Yes, women can certainly sing hosannas now.
The Democrats will only need a cigarette now when the Republicans line them up against the wall. They're already wearing the blindfold.
Posted by Dan Hagen at 6:59 AM