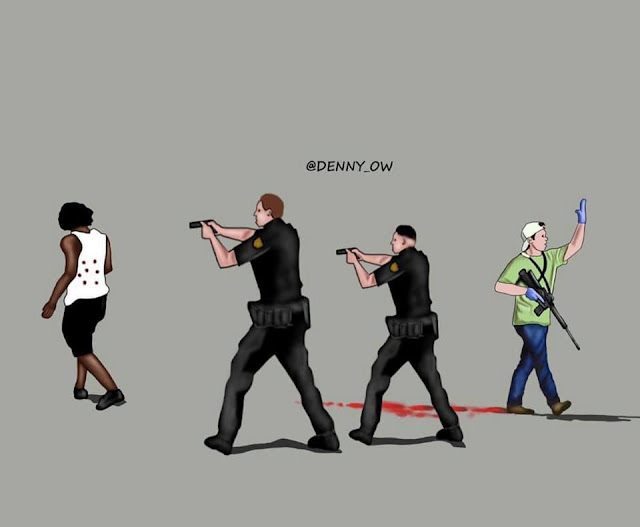 You know what’s truly stomach-turning? To watch people contorting themselves like strippers on a greasy pole to make lame excuses for police criminality in Wisconsin.

Even as the rule of law collapses right in front of them, they’re willing to do anything but face the truth.

See, the Kenosha police chief says we’re ignoring the all-important CONTEXT that makes shooting an unarmed man seven times in the back okay.

That sure must be one hell of an interesting CONTEXT. Either that, or the Kenosha police chief is one brazenly lying sack of shit.

When I was 17 years old, I was working as a radio announcer and excited that I would soon be attending a university. I was not planning to get an assault rifle and cross state lines to hunt and murder some human beings. And if I had been, I’d still be in prison. Where I would belong.

Kenosha’s Killer Kops can ambush protesters by jumping out of unmarked cars, but they let a murderer like Kyle Rittenhouse walk away right past them, cross state lines and curl up in his cozy bed, his precious assault rifle still warm.

“This helps us understand what happened in Wisconsin as not a bug in the code of American policing, but a feature,” wrote Zack Beauchamp

“There’s a reason anti-police violence protesters have been met with crackdowns, while armed anti-lockdown protesters could menace the Michigan Capitol without incident.

“Police — who are heavily white, heavily male, and overwhelmingly conservative politically — see guns as a scourge when they’re in the wrong hands. But the ‘wrong hands’ tend to be black and brown ones. When respectable-seeming white people arm themselves, police welcome their intervention — even, or perhaps especially, in a tense situation where the potential for escalation to violence is really high.”